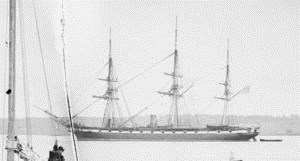 The first USS Pensacola was a screw steamer that served in the United States Navy during the U.S. Civil War.

Pensacola was launched by the Pensacola Navy Yard on August 15, 1859 and commissioned there on December 5, 1859 for towing to Washington Navy Yard for installation of machinery. She was decommissioned January 31, 1860, and commissioned in full on September 16, 1861, Captain Henry W. Morris in command.

Pensacola departed Alexandria, Virginia on January 11, 1862 for the Gulf of Mexico to join Admiral David Farragut’s newly created West Gulf Blockading Squadron. She steamed with that fleet in the historic dash past Confederate Fort St. Philip and Fort Jackson which protected New Orleans, Louisiana on April 24. The next day, Pensacola engaged batteries below that great Confederate metropolis. On April 26, a landing party raised the United States flag over the mint at New Orleans.

During the next two years, she helped guard the lower Mississippi River, returning to New York Navy Yard where she decommissioned April 29, 1864 for the installation of new and improved machinery.

Recommissioned August 16, 1866, Pensacola sailed around Cape Horn to join the Pacific Squadron, serving from time to time as flagship. Her cruising ranged from Chile to Puget Sound and west to Hawaii. But for two periods in ordinary, February 15, 1870 to October 14, 1871 and December 31, 1873 to July 13, 1874, she continued this duty until detached from the Pacific squadron in June 1883. Departing Callao, Peru on July 18, she sailed west across the Pacific and Indian Oceans, transited the Suez Canal, and steamed the length of the Mediterranean Sea before crossing the Atlantic to arrive in Hampton Roads on May 4, 1884. She decommissioned at Norfolk, Virginia on May 23.

Recommissioned April 4, 1885, Pensacola operated in European waters until returning to Norfolk in February 1888 for repairs. Operations along the Atlantic Coast and a cruise along the coast of Africa ended when the ship returned to New York in May 1890. In August she headed back to familiar haunts in the Pacific, arriving in San Francisco on August 10, 1891. Following a visit to Hawaii, she decommissioned at Mare Island on April 18, 1892.

Recommissioned on November 22, 1898, Pensacola served as a training ship for Naval apprentices until going back into ordinary on May 31, 1899. She was back in commission July 14, 1901, subsequently used as receiving ship at Yerba Buena Training Station, San Francisco until finally decommissioning on December 6, 1911 and struck from the Navy Register on December 23. She was burned and sunk by the Navy in San Francisco Bay near Hunter’s Point early in May 1912.