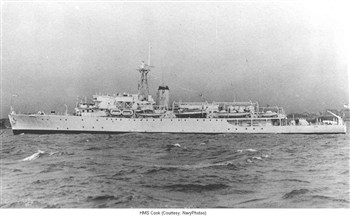 Whilst surveying in the Seychel Islands a group of us were put on Mahe to set up a radio signal station.during this period an atoll appeared in the Maldives and the ship set off to investigate.She struck a reef whilst investigating which effectively left us stranded on Mahe untill her return some several weeks later.I would love to know if any members were with me on this adventure

See photo of Cycle exped. Casablanca to Cadiz ( San fernando) HMS Owen Cycle team. We rode on Pussers Bikes ,no gears, to Tangeir then across by ferry to Algerciras. then to Cadiz. Any one out there who might have taken part ? I only remember M(E) Ken Bone. See Photo 300 + miles in two weeks Memories for some surely ? Ray H