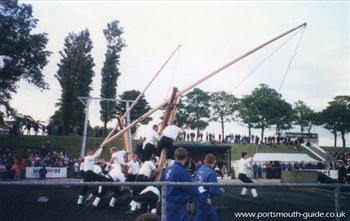 In 1880 the first Military Tournament was staged in an Agricultural Hall from which the present Royal Tournament evolved in 1883, but the Royal Navy did not take part until 1896. During Ladysmith (1899) Captain Perry Scott landed a number of 4.7 inch guns to have carriages made for them. Two of these together with four 12 cwt 12 pounders were sailed to the Blackjackets. It was during this campaign that one of the gun wheels collapsed. The Blackjackets manhandled the gun over two miles to the top of a hill and into action.
The popular event of Field Gun has come to an end with the last display of field gun by the Royal Navy being held in the Royal Tournament in 1999. "The Final Chapter" of Field Gun marks the 100 years since the Battle of Ladysmith.

On Monday 2nd August 1999 the last ever Gun Run took place between Portsmouth and the Fleet Air Arm. The Field Gun crews all wore black arms bands which was contrary to their orders. They had been told that a two-second penalty for each of the 18 men in the team wearing an arm band would be given. Both teams wore arm bands so that neither would loose due to penalty points but neither team was penalised.

At the end both teams gathered in the centre of the arena for a standing ovation and both teams unveiled banners, Portsmouth unfolded a banner offering their thanks for the years of support. The yellow banner, unveiled in front of the royal box where Princess Anne watched as guest of honour, simply read "The final chapter goodbye Portsmouth Field Gun".

All the spectators, past and present members of the Field Gun crews were sad that the decision to end the Field Gun has been made. It has been a hugely successful event held yearly at Earls Court, drawing millions of of spectators and being broadcast on television.