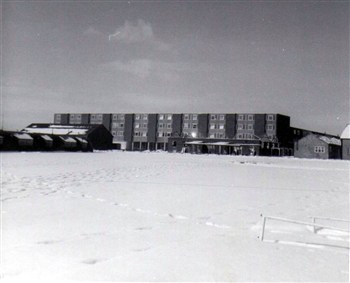 How many "2547---" out there are not aware of the BEACHLEY OLD BOYS association ? goto www.boba-beachley.org.uk/

Was there anyone else there between 1949-1952 other than me? Can't remember everyone but some names come to mind. Company Sageants Butler-Callaghan?-Housley. Apprentices: Roberts-Pook-Prince-Bolton-Scales. Anyone out there that knows me or was there, get in touch please.

Good NEWS today I have just ordered the first print run of our book ’The HARROGATE Army Apprentice’, so if you would like to submit your orders for them I will pop them in the post to you as soon as they arrive. I have seen the first copy and it looks absolutely fantastic. They are about the size of a phone book (200 pages) with an attractive soft laminated cover, the price being £15 plus £2 for post and packaging. If you would like to purchase a copy please send your cheque for £17 to me Fred Carslake at 29 Coopers Drive, Yate, Bristol BS37 7XZ. If you would like to purchase more than one copy just double up on that amount for each copy required as they will be sent out individually packed. (please PRINT your name and address) They will make a first class PRESENT to all YOUR FRIENDS and RELATIVES so they can see what you got up to in your younger life. I know you don’t want anyone to know where you are but you can always get someone else to order one for you.

Army Apprentice School Harrogate, Harrogate AND Beyond in 1957

I have just spent the last 14 years writing a book about my army days and beyond. Here’s a few details - ’The HARROGATE Army Apprentice - Our Story’ Part One tells the story of what we actually did and got up to while we were there, the Army Apprentice School at Harrogate turned raw young boys many from broken homes into very skilled tradesmen. The skills instilled in us during our apprenticeships made the modern army what it is today and these boys came from all over the UK. Part Two covers the time we left Harrogate and served in the regular army showing how far up the military ladder we went, it also shows details of our Roll of Honour write-ups. Returning to Civvy Street and the relevance that our army lives had on our civilian careers is also covered in this section. The success stories of these ex Harrogate apprentices are what this book is all about, it will certainly give a great deal of inspiration to every one reading it, whatever their age group I feel that this book could go a long way in showing people out of work the way forward. The book which contains stories from over 40 ex army apprentices reflects on what many did to overcome a number of employment difficulties when they came out of the army leading to very successful civilian careers. Although I self-published the book without any funding it can be found all over the web either under the books name or my own name and because of this, I have been able to give away £950 to army charities so far. My contact details are - Fred Carslake 29 Coopers Drive, Yate, Bristol, BS37 7XZ Tel : (01454) 317112 Email : fred.carslake(AT)sky.com using the correct (AT) of course The book can be bought from me for £15 plus £2 P&P at the above address