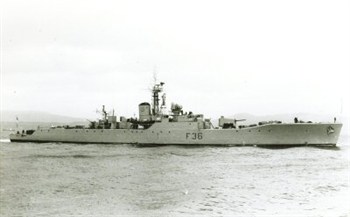 What a great ship. As a Radio Operator, had access to everyone. The wanderings of a World Cruise, from Acapulco, San Diego, Honolulu, Samoa, Tonga, Brisbane, Sydney, Devonprot, Hobart, Freemantle, Darwin, Singapore, Bankok, Hong Kong, Suic Bay, Colombo, BEIRA, Simonstown, Azores, Gibraltar, Rotterdam, Kirkwall, Reykjavik, Godthaab, Gronendal, Bermuda and Panama, just to name a few. At 19 years old, lots of trouble, too many drinks, and was the best time of my life thanks to all the great crew. Thank you.

after leaving the navy you just get on with life, many years on i discovered forces reunited, took the plunge and found a mate that i joined up with back in 1972 and we served together on hms whitby. we both left the ship the next year never saw him again until 32 years later, we chatted for hours and caught up with the years. many thanks to forces reunited. ( cags )