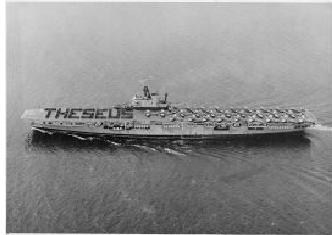 Joined Theseus for sea training in 1955 having spent a year at HMS Ganges’ Served with my twin brother Terry who has now, sadly, passed away. I remember being the youngest sailor onboard, I was actually 25 minutes younger than my bother, and I was given the honour, on new years eve to ring out the old year and ring in the new on the ships bell. The Captain thought it a bit of a novelty to have twins serving onboard the same ship and allowed us both to carry out this duty together. I think everyone who attended the ceremony thought it was great fun.
We both served onboard Theseus until early 1957 and took part in both the Cyprus operations and the Suez campaign in 1956. It is quite possible that I was the youngest sailor taking part in that operation. My very own ’Claim to Fame’