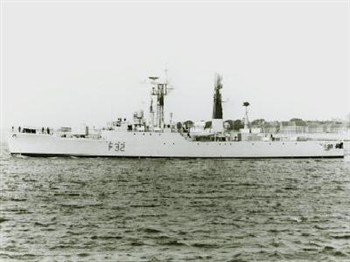 A memory that I will always remember is, when being inspected in Singapore dockyard by Lord Mountbatten and him taking the time to ask me about my family and where I lived, Bob (Tuffy) Draper (stoker)

Very soon we were on our way north and the First Lieutenant, ever anxious to keep the ship’s company informed, announced that we would not be returning to Devonport but would proceed to the Clyde Submarine Base at Faslane to take on fuel before carrying on to sea to fulfil an as yet un-named task that their lordships had in store for us. The weather was still very rough, about Force 9 or 10, all the way and the good news was that we would arrive in Faslane on Christmas Day and Christmas Dinner would be postponed so that we could have it in harbour and nobody would have to chase their turkey over the table as the roll of the ship tried to throw their dinner across the messdeck. It is tradition in the Royal Navy for the ratings to be served Christmas Dinner by the officers but this wasn’t really feasible on Salisbury as we didn’t have a dining hall, as modern ships do, and we all had to collect our meal on our individual platters from the galley counter. Our officers and senior rates did join us for the meal though and the wardroom supplied the beer and a tot of rum to help us celebrate and that was fine by me.
Almost immediately after our dinner the ship was off to sea again and it was time for the Captain to tell us how we would be deployed. He told us that a Soviet destroyer was at sea, just outside UK territorial waters, off the northern coast of Scotland and it would be our job to follow her around, take pictures, and see what she was up to for the next week or so. This was much the same as the Russians did when we were on exercise in those days of the Cold War but many of our lot thought they went to sea on purpose just to bugger up their Christmas. Now that it was clear what we would be doing and that we would certainly be at sea over the festive period we were advised that we should keep a close eye on morale and especially among the family men who might feel the strain of missing the wife and kids at this time.
The next day was, of course Boxing Day, and everything was settling down to just being a normal time at sea. I was quite surprised when Jan Weeks, one of the young chefs came rushing down the store to tell me that Old Soapy was down the mess supping on a can of beer and crying his eyes out and it was my job to go and sort it out. This came as a bit of a surprise to me as Soapy was a rough old Three Badge Killick Chef with, as far as I knew, a heart of stone and I couldn’t imagine what could be upsetting him. By the time we had walked forward and descended into the messdeck I had decided that I was being a bit harsh on Soapy, he was, after all a loving husband to his wife and the proud and devoted father of four lovely children. So I arrived in the mess ready to comfort the distressed parent and calm the situation down.
There was Soapy, sitting in the after end of the mess, consuming his fifteenth can of McEwans Scotch Ale and sobbing loudly. I went up and sat beside him and asked what the matter was. I was ready for him to tell me how sad he was that he was missing the company of his wife and family and was sorry to miss seeing his sons and daughters playing with their new toys, but that was not what was troubling Soapy. Through the tears and the beers he exclaimed, “That bitch! She’ll have scuppered all the booze by the time we get back! I paid for it but she’ll drink it!” Grins appeared on all the worried faces of our messmates and the whole place erupted with laughter as I mumbled, “Bloody Hell, Soapy, buck up,” and headed off back to my work. Soapy went away for a kip, sobered up and the incident was never mentioned again until now.
The rest of that little trip passed without much incident as we followed our Russian pals across the North Atlantic and Arctic Oceans, taking happy snaps along the way. We returned to Devonport on the second of January and I for one, was quite pleased to have missed all the commotion and drunkenness of Christmas and the New Year. It was the first time that I had been sober over that period in years and I’d be able to get ashore and sink as much beer as I wanted without being encumbered by the amateurs who always appeared out of the woodwork for their annual piss up at this time of the year.