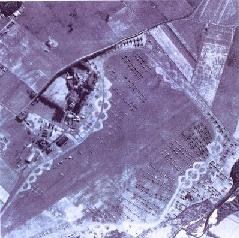 At the outbreak of war Capt. Freeson was resident in Kerrogair house and had advertised to the Air Ministry that he was regularly flying from Dalcross with Gypsy Moth G AAWO and Dragon G ACIT. Capt. Freeson advised the Ministry that the site should be developed into an RAF aerodrome — his advice to Ministry was not altruistic as he intended to use the site for a civil operation on the back of the Air Ministry development. The Air Ministry accepted Capt. Freeson’s advice; however, they then immediately evicted him from Kerrogair house. Development of the site commenced in 1940. The airfield was lying in a hollow and subsequently became very muddy whilst it remained a grass strip. The first users were Lysander aircraft from 614 squadron detailed on anti invasion patrols. The winter of 1940/41 was so wet that the construction of three hard runways began, the layout of the runways was very unusual as they all intersected at the centre of each runway. Prior to completion No2 Air Gunnery School was installed in 5 July 1941. Shortly after 19 Operational Training Unit with Whitley bombers arrived and began using the runways for night training in August 1941. Autumn 1941 saw Oxfords from RAF Shawbury arrive at Inverness, when conditions on the airfield became too muddy aircraft were relocated to Brackla, Longman or Elgin airfields. In 1942 Miles Martinet and Westland Lysander, Boulton Paul Defiants and Avro Tutor aircraft were resident, along with a detachment of Oxford aircraft from No2 Flying Training School at Montrose. In autumn of 1942 Dalcross was reformed into 19 Flying Training Unit and more Airspeed Oxfords were acquired throughout the winter of 1942/43.