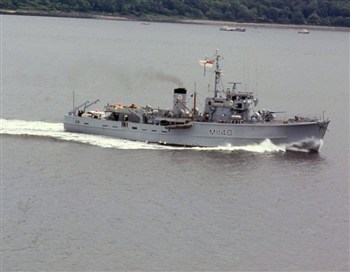 I was on board HMS Gavington 1977- 1978.. Anyone else care to remember Lt Buin with his Kazoo and violin?.. something not easily forgotten..
Can anyone remember what the reason was behind the massive great boxing Glove on the Bridge Screen?..
Took part in the Spithead Review for the Queen's Silver Jubilee.

Voyage from Hamburg to Rosyth HMS GAVINGTON in 1983

Ship's crew were getting changed to 'go ashore' as a force 12 was raging outside the harbour walls when we were shocked to hear over the tannoy system the captain announcing that we were to prepare for setting sail to Rosyth. A voyage that I will never forget in my life. A voyage that put the lives of whole crew of HMS Gavington 1982/1983. A voyage I would like to recall with others who went through it. I would like to understand why the Captain took us to sea that day and what were the thoughts of others, including the officers, about his decision.
The ship itself was completely ripped to shreds and pieces of equipment lost overboard. I would like to know if he ever had to face Naval justice for his decision to take us to sea that day from Hamburg to Rosyth. A voyage that took days rather than hours because we had to ride the waves that were mountains. The sea was white and rolling mountains through us up and down. We surfed the mountains when coming down and climbed them when going up. Sick swilled the lower decks and men fell like children.
The metal walls of the ship were ripped like paper and cranes and davits ripped from the deck. What was the Captain's name? I have a name in my divers log of Lt Commander Edmonds. Can anybody else remember this voyage and help put the story together?