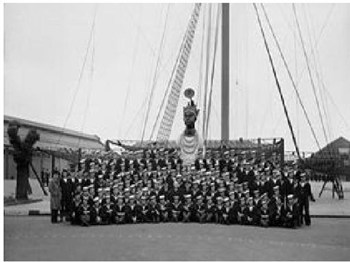 15 March, cold as charity, arrived at the Annexe, hair cut and then supper, drew bedding, allocated mess, made up beds "pussers style", bath and dhobi, turned in, lights out! Crash! Bang! Wallop! Lights on, Tug Wilson in a heap, bed on it's side, tried to have a crafty drag by leaning out the window! Made to stand in the mess dustbin under the Annexe mast, shouting "I'm a ghost" for an hour. Dress, pyjamas and oilskin.
Collingwood 44, "Green Mansions" corregated walls, concrete floors! Cold as charity! Even the "drying room" was cold!
Chiefy West, "Seamanship." "Tinger Ling" PO.GI Parade Drill instructor. We hated them, but turned out they were the best friends we ever had, I still live by their standards today. Footwear cleaned everyday, laces removed, bath and dhobi, clean nicks and socks, sewing cable stitch, splicing rope, hospital corners,making "kai", standing up straight, swinging your arms, no hands in pockets, always looking as though you are going somewhere! Funny how things stick!
Climbing the Mast! The rigging shaking in tune with the climbers. Paul Drinkall having to go thro' the Lubbers Hole at the "elbow" because he was such a"short arsed " little devil, he couldn't reach up and over the elbow. Reaching the "half moon" through the hole and down the other side. Much later, Manning the Mast for the Queen's Birthday Parade, all done to the drum beat
Joining The Bugle Band as a drummer, spending hours under the instruction of the Royal Marine Drum Major. First "Divisions" as a drummer, never hitting the drumskin once!
Sailing cutters, pulling whalers, MFV week-end to Ipswich or Felixstowe,sea training on HMS Chaplet or Paladin, we're real "roughy toughy" sailors now! Evening classes to get you up to HET standard, seamanship classes, parade ground drill, "skylarking about" and meeting "Faith, Hope, and Charity" dressed for the occasion, oilskins back to front and wearing gas masks!
Guard Class, smart as a pin! Passing out Parade , Mums and Dads real proud, if you had them, some didn't, never mind "the Andrew" will look after you! Saying goodbye to friends, and then on to your "specialist training" after a spot of leave. Victualing Allowance burning a hole in your pocket, going for a wet! Uniforms got you away with "murder". Once on that train at Ipswich you were "proper little Jack me Hearties!"

Window ladder display,I would like to say I was one of the guys on the ladder,but no, I was one of the lads who carried out the poles that the ladder was suspended too.I can tell you they were heavy at first until you got used to the wait.At one point during training we carried the pole with our PO standing on top of it.I think we spent 3 weeks in London,living upstairs in Earls court quite an experience.Happy days.

I was a shore in Harwich with my oppos and to get back you had to get the liberty boat at 2330 from the Trinty pier. Well I was last on, but as I went down on the last step I slipped on the green slime and only just grabbed the side when some right wag bellowed cast off, and then the boat took off with me hanging on the side and the lads were either trying to tickle me or bite my hand for me to let go, the air was pretty blue from me and if I was rather rat arsed I was dead sober by then, but then the lads heaved me in laughing like mad and me still swearing I would rip off their most prized item. At the quay on Shotley side we had to crossed over cutters and whalers I slipped in one yet again and the Joss said in his nice warm Cronish tones DQ’s to sober up young man, I said hold on Joss I am as sober as judge he replied things my Mother would never say. God who made cell blankets that rough I ask??? Great days

The two photographs attached to my profile are of Exmouth 251 & 356 Classes in 45 Mess, HMS Ganges (1962-63). I am hoping that all/some of those pictured will respond with a view to meeting up at Shotley (or thereabouts) in June 2012 to commemorate the 50th anniversary of our joining the Royal Navy. Do please get in touch!!