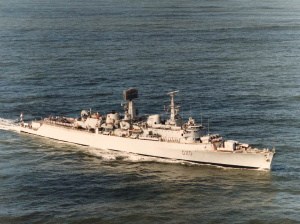 I still remember the joy at being able to move out of 2e mess mess square, where everyone farted on your pit while watching the tv, out into the sacred arena of the starboard gulch. To be in the presence of sea daddies such as Steve McGarry and Steven Smith. People look forward to winning the lottery, well back in 1986 that for me was the same. What a saddo!!

I remember when they moved out the Sparkers from 2E Mess and down into 3Q (I think) the old Killicks mess, we were a bit cheesed off, as we were getting the S&S instead. As it turned out, we got a pretty good deal, it's not too shoddy having the blokes who sort out your pay, and sort out your kit as mess mates. Also, we used to give the chefs a shake, so they could prepare scran in the morning, always with a cup of tea, nato standard, stirred to starboard. So later on when they gave us a shout to say the bread was coming out of the oven, we would run down, get a loaf and a block of butter and sit in the MCO, 5 in the morning, bushed because we were halfway through a long morning, and chomping on hot buttered bread, lush!!!

Remembering 'Hooley Alley' in the PO's Mess on the 'Good Ship Fife'. We all had ties made in Hong Kong. I still have mine! Joe Corbin, 'Ollie the chef. Anyone still out there? Need to get in touch again.

Once "borrowed" a horse in Scapa Flow with partner in crime Steve Riley so we could get across the island to the only bar that was open at the time. (No taxis there) Gave the farmer my ID card so he knew we had to deliver Neddy back, but was late so shot through ! Got a £25 fine (plus 25p for the new photo !). But, as this box title says, Memories !