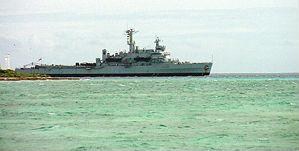 Of late I have seen and read a number of accounts of who was the last of the uk servicemen to leave ADEN. Well I believe that I was possibly one of the last twelve to leave, at the time I had been posted ashore from HMS Fearless, being a royal marines sigs I was opperating on one of the jetty,s loading ships. When the pull out was completed, 12 royal marines off the Fearless were detailled as bodyguard to the politician ( I dont remember his name) who was to sail out to the Island of Perim and another Island to offer them the oppertunity to stay with the uk or not. He and the body guard were stationed on the Empire Gannet for about a week or two after the pull out by everyone else. So I believe me and my 11 mates were probably the last to leave Aden

Had a great time on the Fearless as it was my first ship afer completion of Radio school at HMS Mercury. Also had some great overseas trips with the Fearless being used for training Midshipment we went overseas a lot Windes, Med and Europe The ship even had a part in the James Bond movie " The Spy Who Love Me" while filming off Malta went to the aid of a greek merchant ship which was on fire . Spithead review .