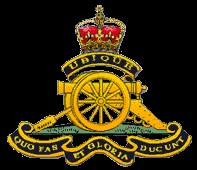 During its history the 7th Armoured Division many Artillery Regiments units served with the Division and it’s Brigades. I have tried to include as many as possible with as much information as possible, but I apologise if I have omitted any.

This page will provide more details of the history of the various the Artillery Regiments that served with the Division.

The story of artillery goes back to pre-Roman times when slings, catapults and ballistas were used to project missiles. Later, longbows propelled arrows both as direct and indirect fire.

The English first used guns in battle alongside longbows at Crecy in 1346. Since then the Army has used them in almost every war and campaign it has fought throughout the world, but it was almost four hundred years before a permanent force of artillery was formed.

In peacetime, guns were kept in castles and were looked after by Gunners, skilled in their manufacture and so most knowledgeable in their use. In wartime, men were recruited and trained into a Trayne of Artillery, until on 26 May 1716 the first two Companies of Artillery were formed by Royal Warrant at Woolwich.

The guns of the Royal Artillery are the Regiment’s Colours, in the same way that the flags and guidons of infantry regiments are theirs, leading them into battle.

The Colours represent pride in the Regiment, so the guns are protected and retained at all costs. If the situation demands that they are left behind they must be disabled or destroyed.

The gun depicted on the cap badge is a 9pdr Rifled Muzzle Loader of about 1871, and the rammer used to ram the charge into the muzzle is also seen, to the left of the carriage wheel.

"Ubique", surmounting the gun, means "Everywhere", and the Motto below Quo Fas et Gloria Ducunt, "Where right and glory lead us".

Prior to 1900 artillery batteries were independent units, being attached to brigades and divisions as necessary, but early in the 1900’s Brigades of Artillery were formed consisting of 2 to 4 batteries. In the 1930’s these Brigades became the Regiments we now know.

Artillery Regiments, (including Anti-Tank and Anti-Aircraft)

For the following units, please read the information provided against each parent regiment. Each section will provide as much information as possible including regimental badges, associations, war diaries, museums, web sites and information available from the Army today.

The Regiments detailed are;

Although part of the Royal Regiment of Artillery, the RHA wore their own cap badge in the Second World War as show above. The ’Grenade’ badge on the right is the one worn on the collar of the uniform by all RHA and RA units.


The 1st Regiment Royal Artillery is the senior Regiment in the British Army when on parade with its guns. The Regiment has a long and proud history stretching back over 200 years and fought in virtually every major action since its formation.

It was in the UK as the start of the war and was mobilised in Bulford consisting of two eight gun batteries A/E and B/O. Although part of 1st Support Group of 1st Armoured Division, it deployed as an Army regiment because the armoured division was not ready. As such the Regiment, less A/E, joined 51st Highland Division, on the Saar Front in the French Sector in April 1940. In June 1940, the Regiment was captured with that Division at St Valery after severe fighting, whilst A/E Battery, also heavily engaged got out at Dunkirk. The Regiment reformed in North Wales around the survivors of A/E Battery  and many others who managed to escape from France and went to Egypt in October 1940. It was still organised as A/E and B/O Batteries until February 1942 when O Battery left it to join 6th RHA, at which time its was re-organised as A, B and E batteries.

It served with the 7th Armoured Division during the Gazala in April 1942, before joining 10th Armoured Division in October 1942, at El Alamein and later Syria/Iraq. After being re-equipped with US M7 Priest 105mm self propelled guns, it move to Italy in 1944 where it served until the end of the war.

After the war it returned to Egypt equipped in 1947, before briefly serving in the UK in 1951 and the moving to Munster, Germany, in 1952.

In 1919 it consisted of C Battery in Risalpur, India, H Battery in Sialkot, India, & K Battery in Meerut, India, moving to Egypt in 1926.

In November 1938 it was re-titled 2nd Field Regiment Royal Horse Artillery and by September 1939 it consisted of H/I, L/N Batteries in support of 1st Armoured Division. It was later