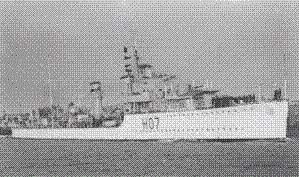 I remember we were docked in Nicosia and a guard of honour off the Defender had to go to Nicosia for the Queens Birthday Parade.being Matelots and not too interested in Army ways we were walking around the camp and we came across the stockade it was a high wire fence with the pongo’s just milling about inside so we started lobbing packets of blue liners over to them.But of course we were soon apprehended but pleaded ignorance,but back to the parade after a couple of days practicing it was decided that the army and R.A.F. would have to slow down to our pace for the march past. The headlines next day were "BOYS IN BLUE STEAL THE SHOW.