Established on 1st April 1999 the Volunteer Reserves Service Medal (VRSM) was awarded to all ranks of the volunteer reserve that completed ten years’ continuous service within the Royal Naval Reserve, the Royal Marines Reserve, the Army Reserve and the Royal Auxiliary Air Force. A clasp is awarded for each additional 5 years' service.

Members of the Honourable Artillery Company receive the same medal but with their own ribbon.

Ribbon – Dark green with three narrow central stripes of dark blue, scarlet and light blue, separated from the green by two narrow stripes of gold. Ribbon colours represents each of the services, with narrow stripes of dark blue for the Navy, scarlet for the Army and light blue for the Royal Air Force, separated by a thin strip of yellow from dark green bands representing the Reserves. Members of the Honourable Artillery Company receive the same medal but with their own ribbon, this being of dark blue and red, edged with narrow yellow stripes—the Sovereign’s personal colours

Description – The medal is a silver oval, 38mm high and 32mm wide. The obverse depicts an image of the sovereign’s effigy. The reverse of the award has the wording on five lines, FOR SERVICE IN THE VOLUNTEER RESERVES, above a sprig of oak leaves and acorns. 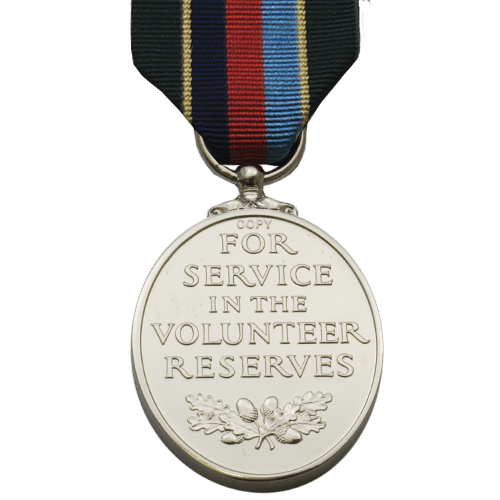