The Victory Medal (also called the Inter Allied Victory Medal) is a bronze medal that was awarded to all who received the 1914 Star or 1914-15 Star and, with certain exceptions, to those who received the British War Medal.  It was never awarded alone.  These three medals were sometimes irreverently referred to as Pip, Squeak and Wilfred.

The WWI medal of which the basic design and ribbon was adopted by Belgium, Brazil, Cuba, Czechoslovakia, France Greece, Italy, Portugal, Romania, Siam, Union of South Africa and the USA in accordance with the decision as taken at the lnter-Allied Peace Conference at Versailles but in a particular form of a historic Greek monument as determined by each nation, with the exception of the nations of the far east who issued the medal but with a different design.

Ribbon – 32mm wide. Reading from the centre outwards, the colours are red, yellow, green, blue and violet merged into a rainbow pattern

Ribbon – 32mm wide. Reading from the centre outwards, the colours are red, yellow, green, blue and violet merged into a rainbow pattern

Naming – In faint impressed block capitals, giving recipient’s number, rank, name and unit.  In the case of medal awarded to officers the names of the regiment was omitted.

Description – Bronze disk, 36mm diameter.  Struck in bonze, 36mm diameter with ring suspender.  Obverse: the winged, full length figure of Victory, with her left arm extended and holding a palm branch in her right hand.  The remaining space is left bare.  Reverse: The inscription “THE GREAT WAR FOR CIVILISATION, 1914-19” surrounded by a wreath.

Clasps - None issued, though those personnel "Mentioned in Despatches" between 4 August 1914 and 10 August 1920 wear an oak leaf on the medal's ribbon 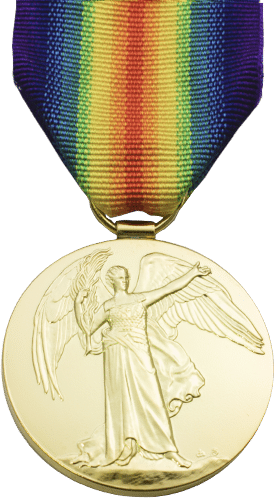