This medal is worn immediately after the Victory medal and before all subsequently awarded war medals, and, before Long Service and Meritorious Service Medals.

Ribbons:     Medals are worn suspended from their own specific ribbons (or Ribands). These where first made of silk but cotton was increasingly used as the ninetieth century progressed.  Their own colours often have a symbolic significance: the blue and white strips of the Egypt medal, for example, are said to signify the blue and white Niles, while the red and green ribbon of the Second Afghan War shows the heraldic colours of Great Britain and of Islam.

Naming – The recipient’s number, rank, name and regiment are impressed in block capitals.

Description – The medal is a circular bronze design of 36mm (1.42 in) diameter, with a straight bar suspender. The obverse of the Territorial Forces War Medal is the coinage head of King George V facing left, with the legend “GEORGIVS V BRITT. OMN: REX ET IND: IMP” The reverse has the legend “TERRITORIAL WAR MEDAL” across the top. Inside a wreath is the inscription “FOR VOLUNTRY SERVICE OVERSEAS, 1914-19”

Sources:
Major L L Gordon ‘British Battles and Medals’
Some of the material on this page was also partially derived from
<en.wikipedia.org/wiki/Territorial_War_Medal>
Which are released under the terms of
Creativecommons.org/licenses/by-s/3.0/. 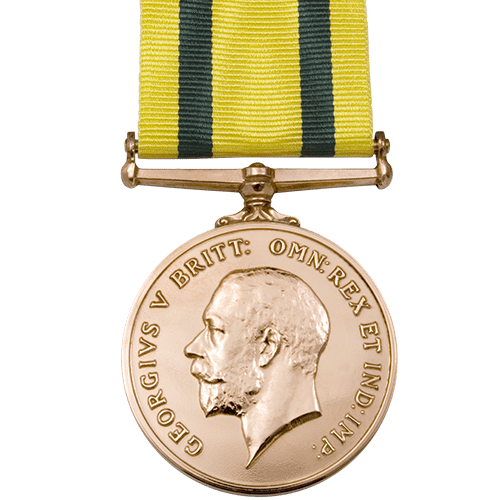