The medal was usually awarded to all ranks in the Special Constabulary for nine years unpaid service, with more than 50 duties per annum. War service with at least 50 duties counted as double. For those Special Constables who served during World War I the medal was awarded for three years’ service, and had performed at least 150 police duties. Recipients who received the medal under these conditions were entitled to a clasp to their medal denoting World War I service.

Eligibility – Members of the Special Constabulary

Bars / Clasps – A clasp inscribed ‘THE GREAT WAR 1914-18’ was awarded to those who qualified for the medal during that conflict. Clasps inscribed ‘LONG SERVICE’, with the date, are awarded for additional ten-year periods

Description – Bronze medal 36mm diameter. The medal obverse of the medal bears the effigy of the reigning sovereign. While the reverse of the medal shows a partial laurel wreath with a six line inscription ‘FOR FAITHFUL SERVICE IN THE SPECIAL CONSTABULARY’. A second reverse was introduced in 1956 for 15 years’ service in the Ulster Special Constabulary, the text modified to permit the inclusion of the word ‘ULSTER’. A third type was introduced in 1982 for 15 years’ service in the Royal Ulster Constabulary (RUC) Reserve and thus inscribed but, with the name change. In 2001 a fourth type was issued inscribed ‘POLICE RESERVE OF NORTHERN IRELAND’ was issued. 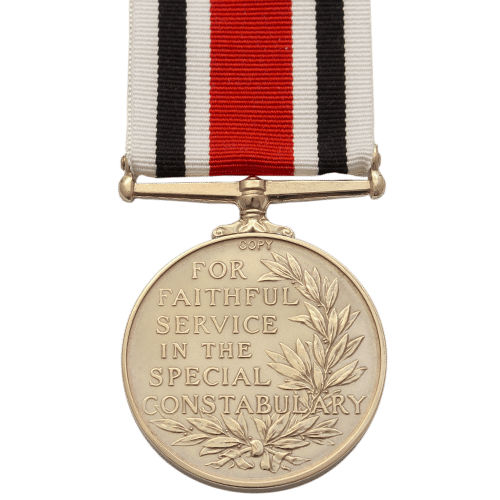