The medal was not issued to anyone qualifying for the campaign stars and medals.

Many Rhodesians served overseas during World War II, only 1,700 of these medals were issued.

Ribbon – 31 mm wide, with a wide dark green centre stripe with narrow black and red vertical stripes at each edge.

Designer – The obverse was designed by Mr. Percy Metcalf and the reverse by Mr. T. H. Paget.

Description – The medal is made of cupro-nickel and is 36mm in diameter. The obverse design bears the crowned head of King George VI, and the legend, "GEORGIVS VI D:G:BR:OMN:REX ET INDIAE IMP:" (George VI by the Grace of God King of Great Britain, Defender of the Faith, Emperor of India). The reverse medal design comprises the Coat of Arms of Southern Rhodesia. The shield bears a pick positioned vertically, blade uppermost, surmounted by a lion on either side of which is a thistle. The shield is supported on either side by an antelope and surmounted by an ornate crested helm. At the base a scroll bearing the motto of Southern Rhodesia, "SIT NOMINE DIGNA". Around the outer circumference of the medal is the legend "+FOR SERVICE IN SOUTHERN RHODESIA+" & "1939-1945".? 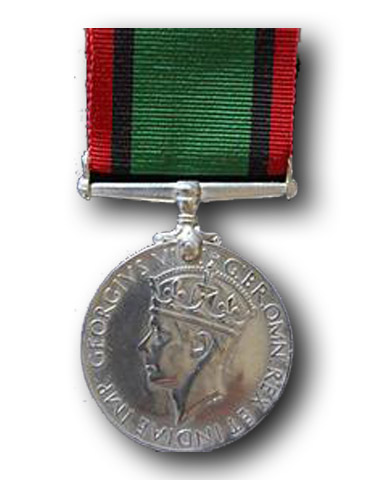