The South Atlantic Medal is a British campaign medal awarded to all branches of the British Armed Forces, Merchant Navy and Civilians who took part in operations in the South Atlantic.  This campaign was between the United Kingdom and Argentina in the Falklands War, the date period being 2nd April, to 12th July, 1982.

Fewer than 29,700 people were awarded the South Atlantic Medal, including HRH Prince Andrew, 1st Duke of York, and civilians such as journalist Michael Nicholson.

No clasps were issued with the medal, but rosette was used to indicate a recipient’s presence in the immediate Falkland's area.

Qualification Requirements for the South Atlantic Medal were:

The medal alone was awarded for 30 days or more in the South Atlantic, south of 7 degrees South and north of 60 degrees South, between the inclusive dates of 2nd April, and 12th June, 1982. The 30 days service period did not have to be consecutive days.

A period of service of 1 or more days in the Falkland Islands, or their South Atlantic dependencies, or in a zone between 35 degrees South and 60 degrees South, or in any operational aircraft sorties out of Ascension Island between 2nd April, and 14th June, 1982 (2nd April, being the date of the Argentine invasion, 14th June, being date of Argentine surrender).

Ribbon – A central stripe of "sea green" flanked on each side by stripes of white and "empire blue", shaded and watered.

Awarded for – Service in the South Atlantic, during the Falklands War 1982.

Established – The South Atlantic Medal Association was formed in 1997.

Naming – Initials and surname, rank or rating, service number and unit of the recipient are diamond engraved on the edge of the medal.  For Royal Navy officers it did not include the service number.

Clasps – No clasp, a rosette instead.

Description – The South Atlantic Medal is 36mm diameter and made of Cupronickel. The Obverse of the Medal has the crowned profile of Queen Elizabeth and the wording “ELIZABETH II DEI GRATIA REGINA FID DEF” on the circumference. The reverse bears a representation of the Coat of Arms of the Falkland Islands, which bears the words “DESIRE THE RIGHT,” surrounded by the words “SOUTH ATLANTIC MEDAL” and a laurel wreath. 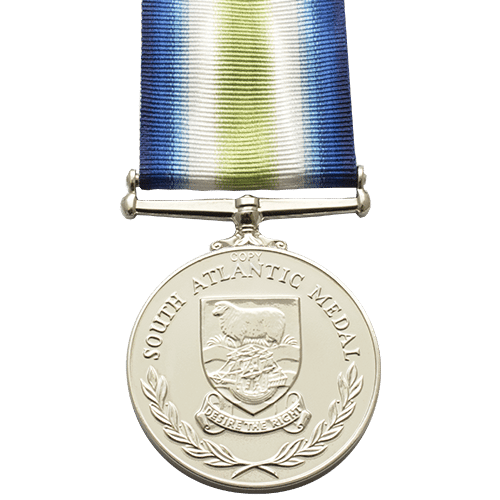