The Silver War Badge was issued in the United Kingdom to service personnel who had been honourably discharged due to wounds or sickness during World War I. The badge, sometimes known as the Discharge Badge, Wound Badge or Services Rendered Badge, was first issued in September 1916, along with an official certificate of entitlement.

The sterling silver lapel badge was intended to be worn in civilian clothes. It had been the practice of some women to present white feathers to apparently able-bodied young men who were not wearing the King's uniform. The badge was to be worn on the right breast while in civilian dress, it was forbidden to wear on a military uniform.

The badge bears the royal cipher of GRI (for Georgius Rex Imperator; George, King and Emperor) and around the rim "For King and Empire; Services Rendered". Each badge was uniquely numbered on the reverse. The War Office made it known that they would not replace Silver War Badges if they went missing, however if one was handed into a police station then it would be returned to the War Office. If the original recipient could be traced at his or her discharge address then the badge would be returned.

The 'SWB List' when mentioned on a M.I.C. (Medal Index Card) refers to a list that is now kept in The National Archives. There are two different types of cards on which the List can be mentioned.
It can also be recorded on a new medal card issued for the purpose, called a Silver War Badge Card.
If there is no Silver War Badge Card,then the details of the soldier's discharge can be found out by a visit to the National Archives at Kew.
There should be a reference to a Silver War Badge Roll, for example in the picture above it says "SWB List TH/345" this refers to the roll in which the man is mentioned.
On the Silver War Badge roll it should mention at the very least the number of the badge, the official reason and date of his discharge.

A Guide to WWI Causes of Discharge - Paragraph 392 of King's Regulations 1912.

Some of the material on this page was also partially derived from <en.wikipedia.org/wiki/silver_war_badge>

Which are released under the terms of the creativecommons.org/licenses/by-s/3.0/. 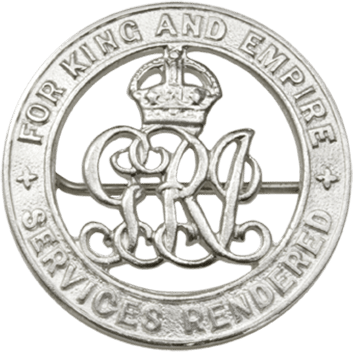 GBP 50
Log In / Register To Buy
View All Medals