When a third identical medal, the Royal Naval Auxiliary Sick Berth Reserve Long Service and Good Conduct Medal, impressed "R.N.A.S.B.R.", was added to the group in 1919, a clasp to recognise further periods of long service in respect of all three medals was authorised in an Admiralty Fleet Order. This was followed in 1942 by the approval of a ribbon bar rosette, to denote the award of a clasp when ribbons alone are worn

It could be awarded to part-time ratings in the United Kingdom's Royal Naval Volunteer Reserve after twelve years of service with the appropriate number of training periods and good conduct. Wartime service counted as double time for the purpose of reckoning eligibility for the medal. The clasp to the medal could be awarded for a second twelve-year qualifying period of service.

The medal was also awarded by several countries in the British Empire.

New Zealand adopted it in 1925, when the Royal Naval Volunteer Reserve (New Zealand) was established.

Clasps – The clasp, decorated in a leaf pattern, was struck in silver and designed to be attached to the medal suspension

Description – 36mm Diameter.  Identical to the Royal Naval Reserve medal, but distinguished by the ribbon and the naming, which includes the letters RCNVR, RNVR, RSANVR etc. The obverse bears the effigy of the reigning sovereign of the period (seven versions of the medal have been awarded), with Edward VII and George V in the uniform of the Admiral of the Fleet and later monarchs' effigies are the coinage type profiles. The medal reverse shows the battleship HMS Dreadnought with the motto ‘DIUTERNE FIDELIS’ ("Faithful Over Time" or "For long and faithful service") at the foot. 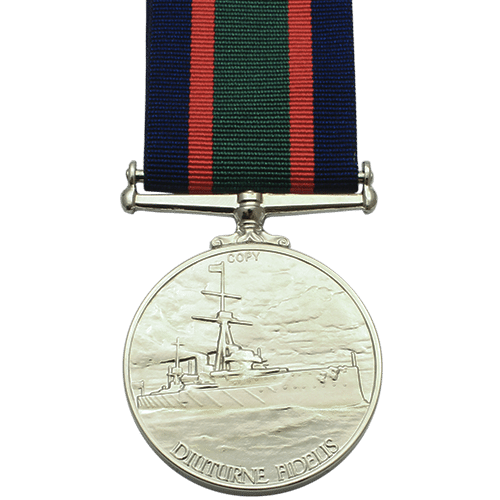