It was awarded to NCO’s and other ranks of the Royal Air Force for 18 years exemplary service, reduced in 1977 to 15 years. Before 1945 conduct below the required standard was permitted to count if the airman had displayed higher exemplary conduct against the enemy, gallantry or some special service in times of emergency. From 1944 and any prior service in the Navy and Army could be counted. Prior to this date only up to four years’ service could be counted. In 1947 officers became eligible for the medal provided they had at least 12 years’ service in the ranks.

Eligibility – Air Force Other Ranks, Conditionally to officers from 1947

Naming – Recipients details are inscribed on the rim.

Clasps – Bar for additional periods of 15 years worn on the medal ribbon. The bar is represented by a silver rosette when ribbon only is worn.

Description – Silver medal 36mm diameter. The obverse of the medal shows the effigy of the reigning monarch, King George V, on the first version. Two versions of the medal each were produced during the reigns of King George VI and Queen Elizabeth II. The reverse of the medal remained unchanged through all versions of the obverse and bears the Royal Air Force eagle with outstretched wings, surmounted by the crown and with the inscription ‘FOR LONG SERVICE AND GOOD CONDUCT’ around the circumference. 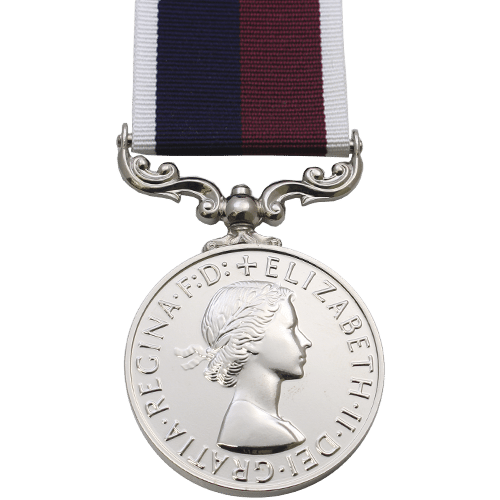