Established in August 1980, the Rhodesia Medal was initiated by the British Government in consultation with Australia, New Zealand, Fiji and Kenya.  It was awarded to members of the armed services, police personnel and civilians who took part in Operation AGILA, (Operation MIDFORD for the New Zealand forces).  The peacekeeping force was multi-national and was to keep peace and monitored the transitional stages of Rhodesia’s independence between 22,000 guerrillas and the Rhodesian forces during the ceasefire run-up to the 1980 elections.

The medal is awarded for service of at least 14 days between 1st December, 1979 and 20th March, 1980, to members of the military and police forces, as well as eligible civilians, who participated in the lead-up to Zimbabwean independence.

Each country treats the medal as part of its own honours system.

The Prime Minister presented the Rhodesia Medal to the Australian Parliament in August 1980.

Eligibility – Civilians, police, and military personnel who participated in the resolution of Zimbabwean independence.

Description – The Rhodesia Medal is circular, 36mm Diameter and made of rhodium-plated Cupro-nickel. The obverse of the medal features the crowned effigy of Queen Elizabeth II and the wording “ELIZABETH II DEI GRATIA REGINA FID DEF”. The reverse of the medal depicts a sable antelope facing to the left, surrounded by the inscription 'THE RHODESIA MEDAL' along the top circumference of the medal and '1980' above the antelope. 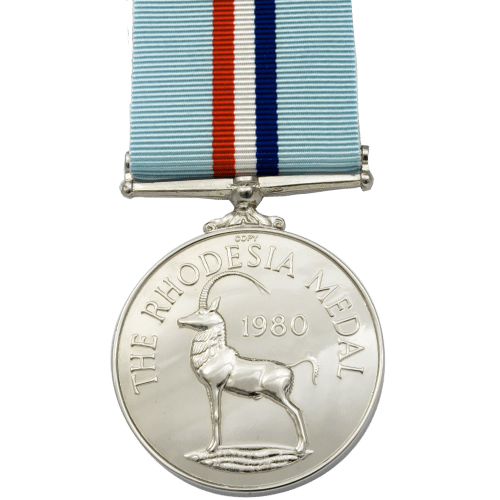