The Queen's South Africa Medal (QSA) was awarded to military personnel who served in the Boer War in South Africa between 11th October 1899 and 31st May 1902. Units from the British Army, Royal Navy, colonial forces who took part (Australia, Canada, New Zealand, India and South Africa), civilians employed in official capacity and war correspondents. The QSA (without bar) was also awarded to troops who guarded Boer prisoners of war at the POW camp on the island of St. Helena. Troops on the Mediterranean islands were awarded the Queen's Mediterranean Medal, and some personnel on troopships got the Transport Medal.

The QSA was the medal issued to all who served in South Africa up to the end of the war in May 1902. This included those such as the New Zealand 10th Contingent who arrived in Durban in May 1902, and did not fight. The requirements for the King's South Africa Medal meant that few were issued

Poor logistics’ and disease made the South African campaign a tough one for the British soldier, men often having to go without basics such as food and water, and enteric fever was a constant drain on manpower.  This combined with having to fight a guerrilla war against a capable enemy makes this a hard won medal. The modern published casualty rolls run to over 50,000 names.

Naming – Generally in indented block or sloping capitals.  Some were engraved in different styles.

The reverse has Britannia depicted holding the Union Flag in her left hand and a laurel wreath in her right hand. In the right background are troops marching to the coast and in the left background are two men-of-war. Around the top are the words ‘SOUTH AFRICA’. The first medals, awarded to Strathcona's Horse, bore the dates ‘1899–1900’. The dates were removed from subsequent medals because the war continued beyond 1900. Some medals still show the 'ghost' of ‘1899–1900’.

Three types of reverse are recorded.  Initially the war was expected to reach its conclusion in 1900 and the medals were struck with the reverse dates “1899 – 1900” (on this type the wreath in Britannia’s hand points towards the letter “R” in “Africa”).  A small number of these were issued before it was realised that the war was to drag on much longer than this.  Therefore the rest of the dated medals that had been manufactured had these dates machined off, though common to see remnants of these dates.  The third type is found with Britannia’s wreath pointing towards the letter “F” of “Africa”.

All troops in Cape Colony at anytime between 11th October 1899 and 31st May 1902, inclusive, who had not received a clasp for a specific action in the Cape Colony or the “Natal” clasp

All troops in Natal at any time between 11th October 1899 and 11th June 1900, both dates inclusive who had not received a clasp for a specific action in Natal or the Cape Colony.

Awarded to those not eligible for the King's Medal although they had served at the front between 1st January and 31st December, 1901.

Awarded to those not eligible for the King's Medal although they had served at the front between 1st January and 31st May, 1902.

All troops in the garrison of Mafeking between 13th October 1899 and 17th May 1900, both dates inclusive.

All troops in the garrison of Kimberley between 14th October 1899 and 15th February 1900, both dates inclusive.

All troops under Lieut .General Sir W. Penn Symon’s command on 20th October 1899 who were north of an ease and west line drawn through Waschbank station.

All troops at Elandslaagte on 21st October 1899 who were on the right bank of the Sunday river and North of an east and west line through Buys Farm.

All troops in Ladysmith between 3rd November 1899 and 28th February 1900, both dates inclusive.

All troops under Lieut. General Lord Methuen’s command who were north of Witteputs (*exclusive) on 23rd November 1899.

All troops under Lieut Lord Methuen’s command who were north of Honey Nest Kloof (exclusive), and south of the  Magersfontein ridge (exclusive) on 28th November 1899.

All troops in Natal north of and including Estcourt between 15th December 1899 and 28th February 1900, both dates inclusive.

All troops of the Natal Field Force, exclusive of the Ladysmith garrison, employed in the operations north of an east and west line through Chievelely Station between the 14th and 27th February 1900, both dates inclusive.

All troops engaged in the defence of Wepener between 9th April 1900 and 25th April 1900, both dates inclusive.

All troops under the command of Colonel Mahon who marched from Barkly West on 4th May 1900 and all troops who were under Colonel Plumer’s command between 11th October 1899 and 17th May 1900,both dates inclusive, and who were south of an east and west line drawn through Palachwe

Awarded to those troops who, on 29 May 1900, were north of an east and west line through Klip River Station and east of a north and south line through Krugersdorp Station.

All troops who, on 11th or 12th June 1900, were east of a north and south line drawn through Silverton Siding and north of an east and west line through Vlakfontein

All troops who were inside a line drawn from Harrismith to Bethlehem, then to Senekal and Clocolan, along the Basuto border and back to Harrismith, between 1st and 29th July 1900, both dates inclusive.

All troops of the Natal Field Force employed in the operations and north of an east and west line through Newcastle between 2nd and 9th June 1900, both dates inclusive.

Please note: When you buy this medal from us, it is supplied WITHOUT clasps.

You may order the various clasps for this medal directly from the supplier (details on your receipt). 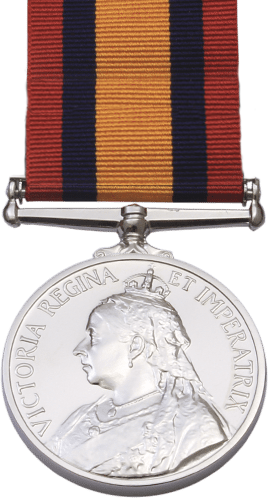 GBP 62
Log In / Register To Buy
View All Medals