Issued in 1902 and authorised by King Edward VII, the Queen's Mediterranean Medal was awarded to volunteers and militia troops who volunteered for service abroad. They had to replace their regular Army counterparts in the various military garrisons with manpower while their regular troops fought in South Africa against the Dutch Boers, after war was declared on the Cape Colony in October, 1899.

This medal was awarded for such volunteers who had served in the garrisons at Gibraltar, Malta and Egypt during the Boer campaigns and for guarding Boer prisoners.  However troops on the island of St. Helena who were guarding Boer prisoners of war in the POW camp were awarded the Queen's South Africa Medal without bar.

Although Queen Victoria had died during this conflict, her portrait was still preserved on this medal, as authorised by King Edward VII. The medal is exactly the same as the Queen’s South Africa Medal except that the inscription 'SOUTH AFRICA' has been replaced by the word 'MEDITERRANEAN' on the reverse.

Naming – Generally in indented block or sloping capitals.  Some were engraved in different styles.

The reverse has Britannia depicted holding the Union Flag in her left hand and a laurel wreath in her right hand. In the right background are troops marching to the coast and in the left background are two men-of-war. Around the top are the words ‘MEDITERRANEAN.’ 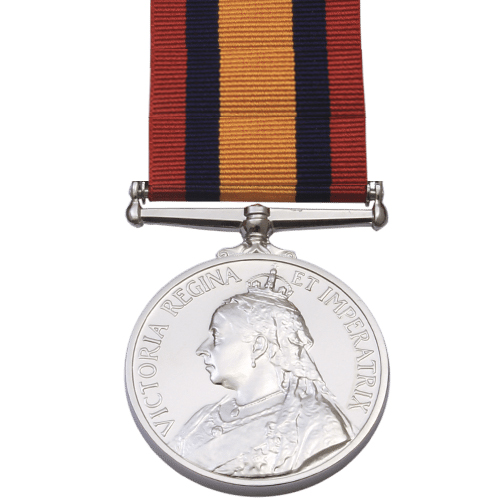