The Queen Elizabeth II Silver Jubilee Medal was a commemorative medal created in 1977 to mark the twenty-fifth anniversary of Elizabeth II's accession to the throne on 6th February, 1977.

The medal was awarded at the discretion of the local government and issued to members of the British government and Commonwealth including those people involved in trade, local services, entertainment, sports, the arts and volunteer workers. 30,000 were distributed in Britain, 1,507 in New Zealand, 6,870 in Australia, and 30,000 in Canada.

The medal like all other Coronation/jubilee medals issued after 1887 has been classified as an official medal to be worn after gallantry and campaign medals, but before all decorations and medals for efficiency and long service.

Description – A circular silver medal 32mm in diameter. The obverse features a right facing profile of Queen Elizabeth II wearing the high Imperial State Crown and the wording “ELIZABETH II DEI GRATIA REGINA FID. DEF” On the reverse of the medal there is a wreath of silver-birch foliage and catkins, with the St Edward’s crown on the top of the medal and the centre has the wording “THE 25th YEAR OF THE REIGN OF QUEEN ELIZABETH II 6 FEBRUARY 1977” on six lines. Note that there is a distinctive reverse for issue in Canada as the medal was slightly thicker, the crown on the Queen's effigy was more upright, and the reverse bore a stylised maple leaf with “CANADA” above and the Royal Cypher below 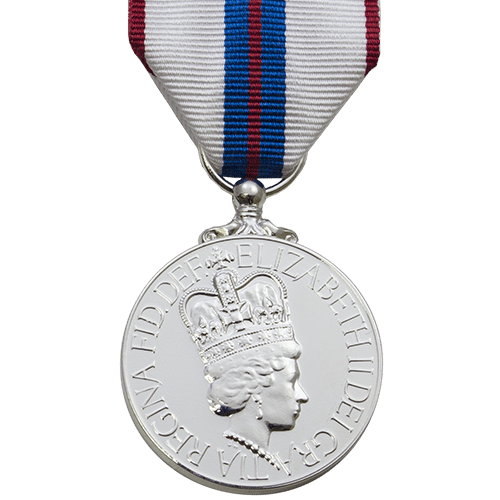