Almost 400,000 medals were issued to members of the Police, ambulance, coastguard, fire services, prison service, RNLI and mountain rescue service. It was also issued to all Regular, Reserve and Cadet forces who were in effective service on 6th February 2002, who had completed five, or more full calendar years reckonable service and were properly enlisted on or before 7th February 1997.

Description – Gold-plated cupro-nickel medal 32mm in diameter. The obverse of the medal shows the effigy of Queen Elizabeth wearing St. Edward's Crown, circumscribed by the inscription “ELIZABETH II DEI GRA REGINA FID DEF”. On the reverse is the shield of Royal coat of arms of the United Kingdom flanked by the years “1952” and “2002”.

The Canadian version of the medal is gold plated bronze with the obverse showing the effigy of Queen Elizabeth and the legend “QUEEN OF CANADA”, “REINE DU CANADA” The reverse features a maple leaf with “CANADA” at the bottom and the years “1952” and “2002” on the left and right of the Royal cypher and crown 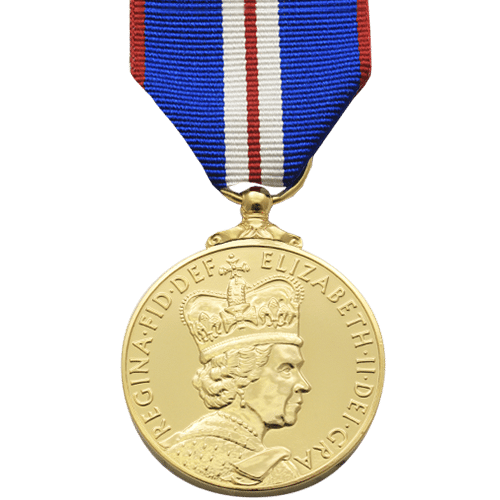