The Queen Elizabeth II Diamond Jubilee Medal or The Queen's Diamond Jubilee Medal is a commemorative medal created in 2012 to mark the 60th anniversary of Her Majesty Queen Elizabeth II’s accession to the thrones of the commonwealth. The medal was a tangible way to honour Her Majesty for her service to the commonwealth and served to honour significant contributions and achievements made by HM Armed Forces (regular and reserves) who had served longer than five years. It was also awarded to members of HM Prison Service,  emergency services personnel and Police Community Support Officers who have been in paid service, retained or in a voluntary capacity, and who had completed five full calendar years of service on 6th  February 2012. Holders of the Victoria Cross and George Cross and members of the Royal Household were also eligible.

There are three versions of the medal: one issued by the United Kingdom, another by Canada, and the third for the Caribbean realms of the Bahamas, Jamaica, Saint Lucia, and Saint Vincent and the Grenadines, Antigua and Barbuda, Grenada, Barbados, Saint Kitts and Nevis

Description (UK Version) – A circular medal, silver in colour and 32 mm in diameter. The obverse shows a crowned effigy of Queen Elizabeth II with the legend “ELIZABETH II DEI GRATIA REGINA FID. DEF.” The reverse shows a faceted hexagon with a crowned royal cipher “EIIR”, inscribed with the years “1952” and “2012”. 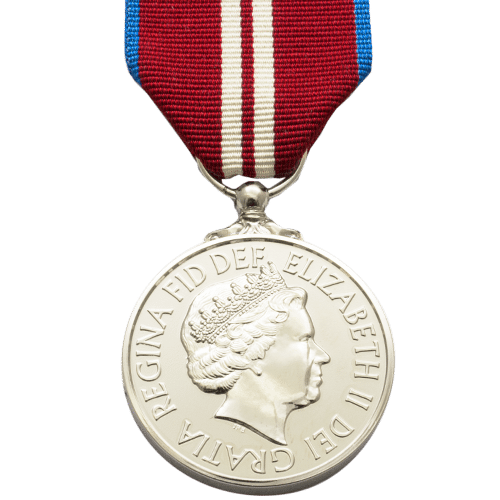