The Coronation Medal was issued in 1953 to celebrate Queen Elizabeth II's ascension to the throne. It was announced from 10 Downing Street in April, 1953 that the Queen Elizabeth Coronation Medal would be issued as a personal souvenir to selected persons throughout the Empire and Commonwealth including members of the armed forces, various government ministers, public servants and officials, police etc. The medal was issued immediately after the Coronation on the 2nd June, 1953 and an approximate total of 138,214 medals were awarded.

Ribbon – Dark red with two dark blue stripes at the centre, and narrow white stripes at the edges. (Female recipients could wear the medal on the left shoulder with the ribbon in a bow formation).

Description – A circular silver medal 32mm in diameter. The obverse features a crowned effigy of Queen Elizabeth II, facing right, in a high-collared ermine cloak and wearing the collar of the Garter and Badge of the Bath. The reverse shows the Royal Cypher “EIIR”, surmounted by a large crown. The legend around the edge of the medal reads “QUEEN ELIZABETH II CROWNED” “2nd JUNE 1953”. 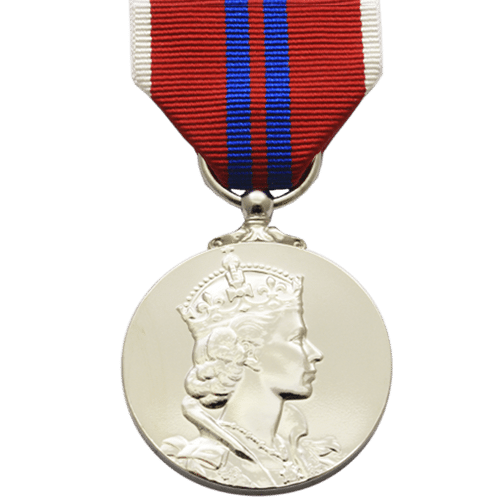