The Pacific Star was a campaign medal of the British Commonwealth, awarded for service in the Pacific theatre of operations between 8th December, 1941, and 2nd September, 1945.  It was also awarded for certain specified service in China, Hong-Kong, Malaya, Sumatra and numerous Japanese held islands and territories between the following specified dates:

Campaign Service in China, Hong Kong, Malaya and Sumatra after the above end dates was recognised by the award of the ‘Burma Star’.

The Pacific Star was awarded for immediate bestowal to any soldier or sailor who had been killed or wounded in combat.

Qualifying details for the Royal Navy

Ribbon – Stripe of green bisected by a central narrow yellow stripe to symbolize the forests and beaches of the Pacific, one stripe of dark blue and one of light blue with red edges to represent the three services of the Navy, Royal Air Force and the Army. The medal is worn with the dark blue stripe furthest from the left shoulder.

Description – The Pacific Star is a six–pointed star of yellow copper zinc alloy, with a height of 44mm and a maximum width of 38mm.  The obverse of the star is comparable in design to the Gwalior Star from the campaign of 1843.  The centre of the star is the Royal Cipher of King George VI, surmounted by a crown overlaid on a circlet which bears the title of the award ‘The Pacific Star.’  The reverse of this medal is the same as other WWII Star campaign medals and plain, with no naming.

Awarded to those who subsequently qualified for the Burma Star. 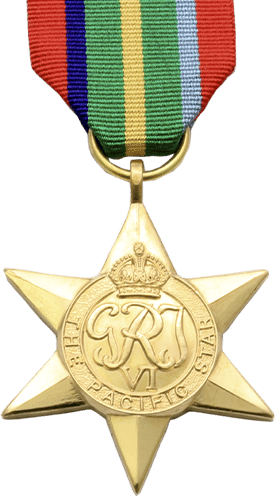