Operational Service Medal for the Democratic Republic of Congo (2003)

The Operational Service Medal for the Democratic Republic of the Congo is a 21st-century British armed forces campaign medal, awarded mostly to regular or reserve military personnel who served between 14th June, and 10th September, 2003 on Operation Coral, with special regard to the hardships and dangers which have accompanied duty there.

The qualifying period for the award of the Operational Service Medal ‘Democratic Republic of Congo’ is a minimum of 25 days continuous service in the Ituri Province between 14th June, 2003 – 10th September, 2003, or 5 missions; a mission is described as a flight operating in support of Operation CORAL between Entebbe – Bunia – Entebbe.

Description: A circular silver medal. The obverse of the medal shows the crowned effigy of Queen Elizabeth II. The reverse bears the Union Flag, surrounded by the inscription ‘FOR OPERATIONAL SERVICE’ and the four major points of the compass, with four Coronets.

Clasps are usually referred to as ‘bars’.  They are single-faced metal bars carried on a ribbon attached to the medal, indicating the recipient’s service in a particular campaign or battle.  The clasps carry side flanges to enable them to be attached to the medal and riveted to each other, so that new ones can be attached as earned.  Usually the first earned Clasp is closest to the medal, so that the latest earned should be at the top, although they can be found in the wrong order 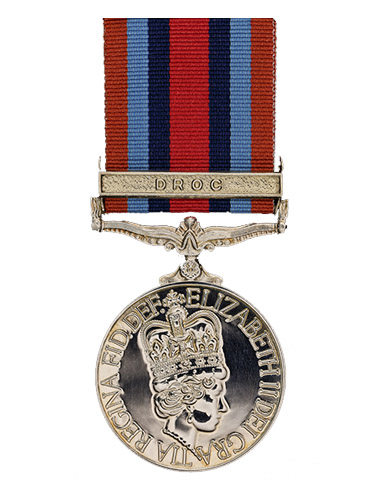