The Operational Service Medal for Sierra Leone is a campaign medal currently awarded by the United Kingdom’s Ministry of Defence for recognition of service on operations within Sierra Leone.

The Operational Service Medal for Sierra Leone was awarded for 14, 21, 30 or 45 days continuous or accumulated service required between certain specified dates on either Op Palliser, Basilica, or Silkman.

Medal with clasp awarded to those personnel with 25 days continuous service between 14th June, to 10th September, 2003 on Op Coral within the boundaries of the Ituri Province.

Ribbon – A broad central red stripe, flanked each side by a stripe of navy blue and one of light blue, to represent the three services, with an outer stripe of green to reflect the landscape of Sierra Leone

The medal is silver and circular in shape and the obverse shows the crowned effigy of Elizabeth II.

‘DROC’                      (14th June to 10th September, 2003) Awarded to those personnel with 25 days continuous service on Op Coral within the boundaries of the Ituri Province. Medal issued with clasp in every case. When the ribbon alone is worn, a silver rosette will also be worn. 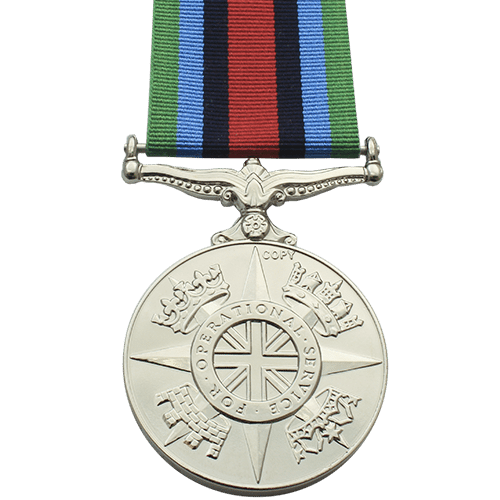