The Operational Service Medal for Afghanistan is a campaign medal currently awarded by the United Kingdom’s Ministry of Defence for recognition of service on operations within Afghanistan from 11th September 2001.

To qualify for award of the Medal with clasp, personnel must have served in Afghanistan for either 5, 21 or 30 days continuous service between various dates depending on the operation, from 11th September, 2001 to 1st August, 2002 for Ops Jacana and Bandog, or to a date to be decided for Ops Veritas, Fingal and Landman.

Service of varying lengths depending on the operation on Ops Landman, Veritas, Oracle, Ramson or Damien in other Middle East countries during certain specific dates will qualify for the OSM for Afghanistan without clasp.

Ribbon – A broad central red stripe flanked each side by a stripe of royal blue and one of light blue, to represent the 3 services, with an outer stripe of light brown to reflect the landscape of Afghanistan.

Description – Silver disk, 36mm Diameter. The medal is silver and circular in shape and the obverse shows the crowned effigy of Elizabeth II.

One Claps was awarded to the Operational Service Medal for Afghanistan 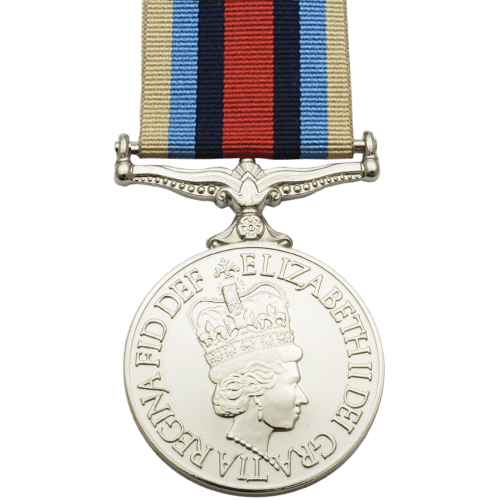