The qualifying period was reduced to ten years in 1874, and then increased again to eighteen years. The time served requirement was finally reduced to fifteen years with effect from 1 December 1977.

The medal was awarded according to a quota system to only a few selected and qualified ratings of a ship's company, with the number of awards based on the total complement of the ship, and only when the ship was decommissioned and its ratings paid off at the end of a period of time, usually a minimum of three years. Along with the medal, a recipient was paid a gratuity of £15 for petty officers or sergeants Royal Marines, and £5 for seamen and marines

The Naval Long Service and Good Conduct Medal (1848) that replaced the anchor type medal was of a completely new design, 36 millimetres in diameter, with the effigy of Queen Victoria on the obverse, the image of a three-masted man-of-war on the reverse and a new Navy blue ribbon with white edges.

In March 2015 the intention to introduce a single new long service medal for all three Arms of the Service was announced, to replace the Medal for Long Service and Good Conduct (Military), the Naval Long Service and Good Conduct Medal (1848) and the Royal Air Force Long Service and Good Conduct Medal. The proposed medal will be awarded after fifteen years of service, regardless of rank, and while the good conduct element of the award criteria will remain, it will only apply to the last five years of the fifteen-year aggregate time served requirement. With this medal Officers, who have had no medallic recognition for long service unless they were commissioned after serving at least twelve years in the ranks, will also be rewarded for their dedication. Subject to agreement from Her Majesty The Queen, a new medal design will be commissioned and a presentation will take place.

Eligibility – Naval Other Ranks, Officers from 1981

Established – introduced in 1830 remained in use until 1847, when it was replaced by the Naval Long Service and Good Conduct Medal (1848)

Naming – Between 1875 and 1877 a number of medals had the years of service added to the recipients’ details, either engraved or impressed on the edge. Engraved naming was used from 1875 to 1877, but then until 1901 impressed naming was used.

Clasps / Bar – The clasp can be awarded for an additional fifteen years of service, subject to the same requirements as those for the award of the medal. When the ribbon bar alone is worn, a silver rosette on the ribbon denotes the award of a clasp.

Description – Silver medal 34mm  diameter (1831); 36mm diameter (1848) The issue known as the "anchor type" on the obverse depicted a anchor surmounted by a crown and enclosed in an oak wreath. The reverse shows the recipients details and has a plain ring suspender.

The second type, adopted in 1848 depicts on the obverse the sovereigns’ effigy and the reverse shows the image of a three-masted man-of-war surrounded by a rope tied at the foot with a reef knot and having the legend ‘FOR LONG SERVICE AND GOOD CONDUCT’ round the circumference. This medal originally had a wide suspender bar of 38mm, but a narrow suspender was substituted in 1874. 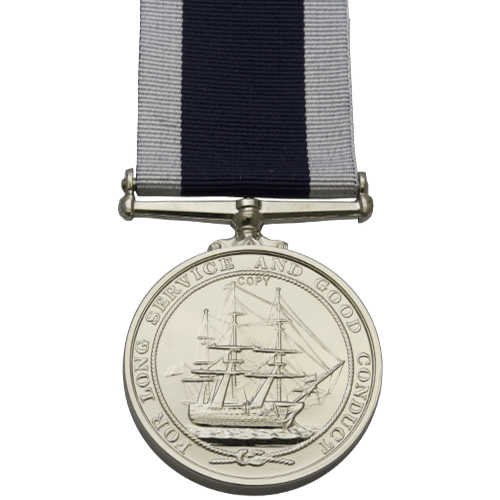