Instituted on 25th March 1916 (and backdated to 1914), the Military Medal was awarded personnel of the British Army and other services, and formerly also to personnel of other Commonwealth countries, below commissioned rank. It was an award for gallantry and devotion to duty when under fire in battle on land on the recommendation of a Commander-in-Chief in the Field.

The Military Medal was the other ranks' equivalent to the Military Cross (MC), (which was awarded to commissioned officers and, rarely, to Warrant Officers, although WOs could also be awarded the MM). The MM ranked below the MC and the Distinguished Conduct Medal (DCM), which was also awarded to non-commissioned members of the Army.

Recipients of the Military Medal are entitled to use the post-nominal letters "MM".

In 1993 after a review of the gallantry awards system the Military Medal was discontinued. Since then the Military Cross has been awarded to personnel of all ranks.

Awarded for – acts of gallantry and devotion to duty under fire

Naming – Impressed Name, Rank and unit on the edge

Description – A circular silver medal of 36 mm diameter. The obverse bears the effigy of the reigning monarch with one of the following legends:

The reverse has the inscription "FOR BRAVERY IN THE FIELD" in four lines, surrounded by a laurel wreath, surmounted by the Royal Cypher and Imperial Crown 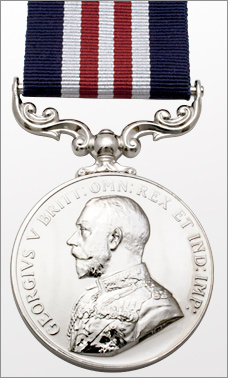