This bronze medal was issued by the Board of Trade to commemorate the war services of the officers and men of the Mercantile Marine, as the Merchant Navy was then called, who served one or more voyaged through a danger zone.  It was given in bronze only to officers and men alike.

Certain members of the Mercantile Marine joined the Royal Navy between the above dates.  They also received the four medals.

Ribbon – 32mm wide.  Green and red divided by a thin white (representing starboard and port running lights with the masthead steaming light in the centre).  The green to be the left facing the wearer.

Naming – Impressed in small or large sans-serif capitals.  The recipients’ first given name is often in full.

Description – 36mm in bronze, obverse has a bareheaded effigy of King George V, facing left, with the legend “GEORGIVS V BRITT.  OMN: REX ET IND: IMP:” The reverse shows bows of a steamship with a sailing ship in the right background.  There is a sinking submarine in the right foreground, which is very hard to distinguish as such.  It’s in between the right-hand wave and the sailing ship.  In exergue the inscription “FOR WAR SERVICE MERCANTILE MARINE 1914-1918” in three lines.  Around the edge of the rim is a laurel wreath. 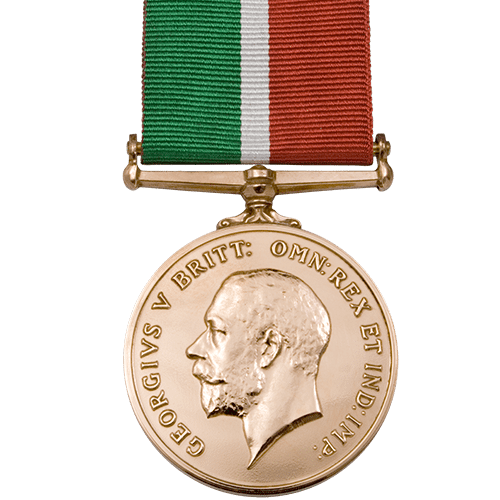