Instituted by King George V in 1930 the Medal for Long Service and Good Conduct (LSGC Military) was awarded for exemplary conduct. It replaced the Army Long Service and Good Conduct Medal which was instituted by King William IV in 1830, for award to soldiers for long service and good conduct. It also replaced the Permanent Forces of the Empire Beyond the Seas Medal, once again had various territorial versions, this time in the form of subsidiary titles inscribed on a bar attached to the suspender of the medal rather than on the medal's reverse.

These subsidiary titles were "Regular Army" on the bar of the medal for the British Army and the name of the dominion country on the bars of the medals for Australia, Canada, India and New Zealand. Apart from the bars, all but one of the medals were identical. The Medal for Long Service and Good Conduct (South Africa), introduced in December 1939, was the exception since the inscriptions on its bar as well as on the reverse of the medal were bilingual, in Afrikaans and English on the bar and in English and Afrikaans on the medal reverse. Instead of the name of the country, the South African medal displayed the inscriptions "STAANDE MAG" and "PERMANENT FORCE" in two lines on the suspender bar.

Originally the Army Long Service and Good Conduct Medal was awarded to soldiers of exemplary conduct for 21 years in the cavalry, but in 1854 the qualifying period was reduced to 18 years and in 1977 to 15 years. During World War Two commissioned officers were permitted to acquire this medal so long as they had completed at least 12 of their 18 years’ service in the ranks. The Army Long Service and Good Conduct Medal was discontinued in 1930 and replaced by the Medal for Long Service and Good Conduct (Military) which could be awarded to Regular Force warrant officers, non-commissioned officers and men of the British Army after eighteen years of unblemished service. Qualifying service included service rendered by a soldier whilst under the age of eighteen, while service in West Africa and in certain parts of the Anglo-Egyptian Sudan was reckoned two-fold as qualifying service. However, there are a number of offences which would normally preclude award of the medal and awards are only made after a thorough check of a soldier's service record. The award of the medal required the recommendation of the individual's commanding officer and it could therefore only be awarded to serving personnel.

Canada discontinued the LSGC medal in 1950 when the Canadian Forces Decoration was instituted, while South Africa replaced it with the John Chard Medal later the same year. From 1930 onwards the lettering of the reverse inscription was in tall, thin letters. In 1940 bars for further periods of service were authorized.

Ribbons:     Medals are worn suspended from their own specific ribbons. These were first made of silk but cotton was increasingly used as the nineteenth century developed. Their own colours often have a symbolic significance: the equal stripes of the ‘1939 to 1945 Star,’ for example, are dark blue to represent the service of the Royal and Merchant Navies, red, to represent that of the Armies and light blue to represent that of Air Forces.

Ribbon – Plain crimson (till 1917) or Crimson with narrow white edges

Ribbon – Plain crimson (till 1917) or Crimson with narrow white edges

Naming – The LSGC is invariably named to the recipient. The William IV and early Victorian issues (to 1854) were impressed in the style of the Waterloo medal and also bore the date of discharge and award. In 1855 issue was not dated, while lettering was impressed in the style of the Military General Service Medal. Later Victorian issues, however, were engraved in various styles, while medals from 1901 onwards are impressed in small capitals of various types.

Description – Silver medal 36mm diameter. Over the long period in which this medal has been in use it has undergone a number of changes. Until 1901 the obverse bore a trophy of arms with the Royal Arms in an oval shield in the centre while the reverse bore the inscription ‘FOR LONG SERVICE AND GOOD CONDUCT’. The first issue had the royal arms with the badge of Hanover on the obverse and small suspension ring with a plain crimson ribbon. A large ring was added substituted in 1831. On the accession of Queen Victoria in 1837 the Hanoverian emblem was dropped from the arms. In 1855 a swivelling scroll suspension was substituted and in 1859 a small lettering replaced the original large lettering on the reverse. From 1901, however, the effigy of the reigning sovereign was placed on the obverse although the reverse remained the same. In 1920 the swivelling scroll suspension gave way to a fixed suspender. In 1930 the title of the medal was changed to the Long Service and Good Conduct (Military) Medal; at the same time the design was modified. A fixed suspension bar was added, bearing the words ‘REGULAR ARMY’ or the name of the dominion (India, Canada, Australia, New Zealand or South Africa). This replaced the Permanent Forces of Empire LSGC Medal.

Clasps are usually referred to as ‘bars’. They are single-faced metal bars carried on a ribbon attached to the medal, indicating the recipient’s service in a particular campaign or battle. The clasps carry side flanges to enable them to be attached to the medal and riveted to each other, so that new ones can be attached as earned. Usually the first earned Clasp is closest to the medal, so that the latest earned should be at the top, although they can be found in the wrong order.

Sources:
Bigbury Mint
<gov.uk/medals-campaigns-descriptions-and-eligibility>
Some of the material on this page was also partially derived from
<en.wikipedia.org/wiki/Medal_for_Long_Service_and_Good_Conduct_(Military)>
Which are released under the terms of
Creativecommons.org/licenses/by-s/3.0/. 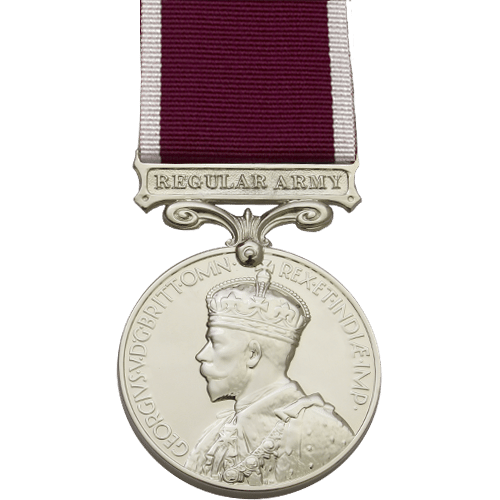