The Korea Medal, or sometimes referred to as the Queen’s Korea Medal to distinguish it from the United Nations Service Medal.  This medal was instituted July 1951 by King George VI for award to the British Commonwealth forces, except South Africa who were deployed to Korea and the surrounding waters between 2nd July, 1950 and 27th July, 1953.  The Qualification period was one day for service on land for all three services, or one operation sortie over Korea for the RAF, or 28 days at sea service in the designated area for the Navy.  The medal was identical in all realms where it was awarded; the Korea Medal holds a different place in each country’s order of precedence for honours.

Ribbon - 31.8 millimetres (1.25 in) wide ribbon with five vertical stripes in alternating yellow and blue, the latter representing the United Nations

Clasps – None, though Bronze oakleaf for a mention in despatches.

Description - Cupro-nickel or silver disk, 36mm diameter (Canadian version in silver).  At the time of the medal's creation, King George VI was King of each of the Commonwealth realms, and his effigy was to have appeared on the Korea Medal.  However, he died on 6 February 1952, and so the image of his daughter was placed on the obverse of the medal, uncrowned, as per custom for sovereigns prior to their coronation.  The obverse is the laureated bust of Queen Elizabeth II facing right surrounded by a legend, the first issue contained “ELIZABETH II DEI GRA: BRITT: OMN: REGINA F;D (Latin abbreviation for: Elizabeth II, by the Grace of God Queen of All the Britons, Defender of the Faith) and the second issue “ELIZABETH II: DEI: GRATIA: REGINA F:D: +”.  Medals to the Canadian forces have the word “CANADA” under the buts, 27,500 issued to the Canadians. (Elizabeth II, by the Grace of God Queen of Canada).  The reverse has Hercules, armed with a dagger, with his left arm out horizontally holding /hydra, which he is also holding off with his left leg (a symbolic representation of communism) with Korea, printed on the bottom.

No medal bars were available, instead a single bronze oak leaf emblem was issued to signify a Mentioned in Despatches, which was worn pinned to the same ribbon from which the medal was hung. 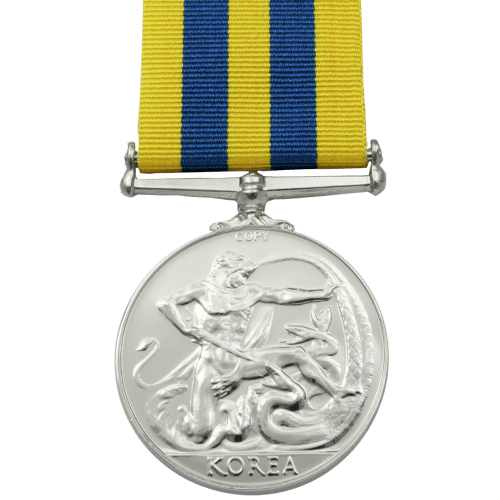