Knight of the Order of St. Patrick

The Most Illustrious Order of St. Patrick - This Order was instituted by King George III on February 5th, 1783, to reward the loyalty of Irish peers during the American War of Independence, it originally comprised the monarch and 15 knights. In 1833 it was extended to include the Lord-Lieutenant of Ireland and twenty-two Knights; also, certain Extra and Honorary Knights. The Order became obsolete in 1974 with the death of the last holder.

Description – A Star; a silver, eight-pointed star, having in its centre, on a white field, the Cross of St. Patrick in red enamel charged with a green trefoil, bearing a crown on each leaf, surrounded by a sky-blue enamel circle inscribed with the motto, “Quis Separabit” and the date “MDCCLXXXIII.”

A Mantle of sky-blue satin made in Ireland, lined with white silk, and on the right shoulder a hood of the same. The mantle is fastened by a silk cord of blue and gold, and it has the star of the order embroidered on the left side.

The Collar, of gold, composed of five roses and six harps alternately, each tied together with a knot of gold. The roses are enamelled alternately, white leaves within red, and red within white. In the centre of the Collar is a golden harp surmounted by an Imperial Crown, and from this hangs the Badge, similar to the central device of the star, but oval in shape, and surrounded by a wreath of trefoil.

In ordinary full dress the Star and Badge alone are worn, the latter being suspended on the left hip from a sky-blue ribbon 4 inches wide, passing over the right shoulder. At death the insignia of the Order are returned by the Knight’s nearest male relative. The ribbon of the Order is not worn in undress uniform. The Star of the Order of St. Patrick is worn as a regimental badge by the Irish Guards. 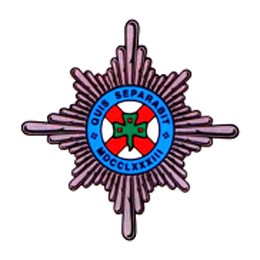