This second campaign medal for the South African or ‘Boer War’ was instituted in 1902, for award to all those who were in theatre on or after the 1st January 1902, and had completed 18 months service in the conflict prior to 1st June 1902.  Service did not have to be continuous, but even with continuous service the recipient would have had to serve from December 1900 to have 18 months service before the war ended in May 1902 (and commencing before the death of Queen Victoria on 22 January 1901). The medal was to recognise service in the difficult latter phases of the war and reward those who by their long service in field had brought the campaign to a successful conclusion.  The medal was never awarded singly and was always paired with the Queen’s South Africa Medal.

Eligibility – Troops who served in South Africa on or after 1st January 1902, and completed 18 months service before 1st June 1902.

(Medals supplied by us come with BOTH date clasps included in the price.)

Naming – Impressed in san serif capitals, in a style also found on the Queen’s South Africa Medal.  Some officers medals are encounter engraved.

On the reverse Britannia is depicted holding the Union Flag in her left hand and a laurel wreath in her right. The right background shows troops marching to the coast and the left shows two men-of-war. Around the top are the words: ‘SOUTH AFRICA’.

All those who served in South Africa between 1st January 1901 and the 31st December 1901, both dates inclusive.

All those who served in South Africa between 1st January 1902 and the 31st May 1902, both dates inclusive.

Medals supplied by us come with BOTH date clasps included in the price. 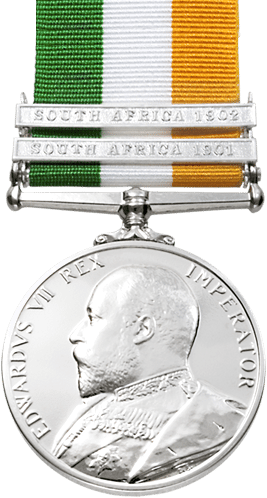 GBP 76
Log In / Register To Buy
View All Medals