During the Great War of 1914-18 it was recognised that there was no suitable award to recognise acts of bravery by civilians such as those serving in the British Merchant Navy that did not merit a specific gallantry medal, and for acts of gallantry during which the person performing the act lost their life. The formal introduction of "Commendations" was the solution approved by King George V and was a system re-introduced in 1939 by King George VI when it was referred to as the "King's Commendation" for brave conduct before being officially titled the "King's Commendation for Brave Conduct". In 1952 the honour was renamed the "Queen's Commendation for Brave Conduct" which was itself replaced in 1994 by the Queen's Commendation for Bravery. Awards were formally published in the London Gazette and a personal certificate presented.

Eligibility – Soldiers of the British Empire or the Commonwealth of Nations

Post Nominals - No entitlement to append post-nominal letters after a recipient's name.

Description – Between 1916 and 1943 there was no physical award other than a card certificate presented to the recipient. An example of a World War II "King's Commendation" certificate gives the details of the recipient and the date of the London Gazette announcement.

From 1943 a small red cardboard box was presented usually containing two gold and red coloured plastic pin-backed badges bearing the design of a sword in a wreath, surmounted by a crown. Boxes containing a single badge are known. The badge was 38mm long by 20mm wide and was designed by George Kruger Gray, CBE. From 1944 the small plastic badge was replaced by alternative insignia in the form a silver metal laurel leaf for civilians and a bronze oak leaf for armed forces personnel (including merchant seamen during time of war). The bronze oak leaf insignia was identical to that awarded to signify a Mention in Despatches. 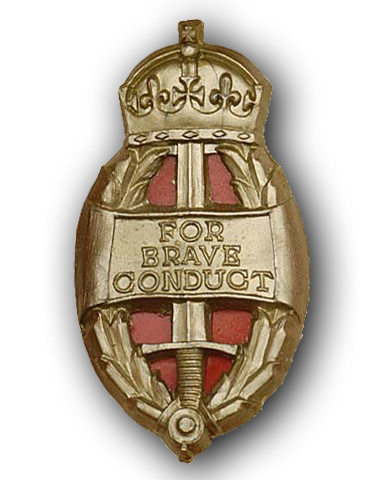