The Italy Star was a campaign medal of the British Commonwealth, awarded for service in World War II.

This medal was awarded for operational service in Sicily or Italy during the period 11th June 1943 to 8th May 1945.

Royal and Merchant Navy service in the Mediterranean and the Aegean Sea and operations in and around the Dodecanese, Corsica, Greece, Sardinia and Yugoslavia after 11th June 1943 would qualify. The 6 months service for the 1939-45 had to be earned, before service could count towards the Italy Star. This restriction did not apply for those personnel who entered qualifying service within the last 6 months, providing they did not enter another operational command.

Naval shore-based personnel were covered by the Army qualification requirements.

Army personnel had no prior time qualification. The applicable operational area for Army personnel was Aegean, Dodecanese, Corsica, Greece, Sardinia, Yugoslavia and Elba between 11th June 1943 and 8th May 1945. Service in Sicily after 17th August 1943, Sardinia after 19th September 1943 and Corsica after 4th October 1943 did not qualify.

Entry into Austrian Territory during the last few days of the Second World War qualified for this star.

A total of 91,000 medals were issued to Canadians.

The Italy Star Association 1943-45 is a thriving body in the United Kingdom. The main reunion of the Association is in Chichester in May of each year, involving a service of Remembrance in Chichester Cathedral and a parade in the town. Members also take part in the march past the Cenotaph on Remembrance Day in London every year.

The motto of the Association is: "When you walk in peaceful lanes so green - remember us - and think what might have been" We do remember them.

Ribbon – The Italian Colours are represented on the ribbon, which is white with a central green stripe and red edges.

Description - The Italy Star is a six–pointed star of yellow copper zinc alloy, with a height of 44mm and a maximum width of 38mm.  The obverse has a central design of the Royal Cypher of King George VI, surmounted by a crown. The cypher is surrounded by a circlet containing the words ‘The Italy Star'. The reverse is plain, although Stars issued to Australian and South African personnel have recipient names impressed.

The ribbon for this medal, along with those of the other Second World War campaign stars, is reputed to have been designed by King George VI. Equal width stripes of red, white, green, white and red represent the colours of the Flag of Italy. 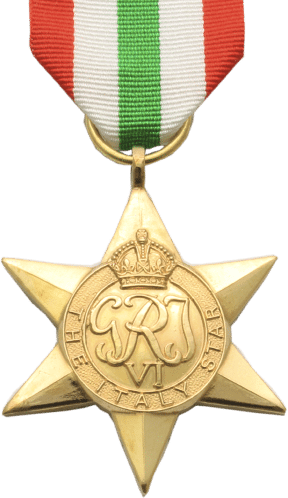