The Iraq Medal was a campaign medal for issue to Officers and Other Ranks of the British Armed Forces, and others, who served on, or in support of, Operation TELIC - the designation for British operations during the 2003 Invasion of Iraq and its aftermath.

The Ministry of Defence announced on 23rd February 2004 the qualifying criteria for the campaign medal recognising service during Operation Telic. The Iraq Medal marks service in, and in support of, operations in Iraq from 20th January 2003, and can be awarded to UK Armed Forces and civilian personnel, including embedded media, and certain foreign nationals assigned to the operation.

Service personnel and MOD civilians who died during their service in Kuwait or Iraq automatically qualify for posthumous award of the medal. Personnel who served on the operation between 19th March and 28th April 2003 may also qualify for a clasp, inscribed "19 MAR - 28 APR 2003" to be worn on the medal ribbon. The area of operations has been divided into Zone One (Iraq and Kuwait) and Zone Two (elsewhere in the Gulf region in support of the operation) for determining eligibility.

A ribbon emblem (silver rosette) has been issued to denote the award of the bar. (for when the ribbon alone is worn)

Struck in cupro – nickel, 36mm diameter with a swivelling suspender.  The obverse depicts the crowed head of Queen Elizabeth II with the legend “ELIZABETH II DIE GRATIA REGINA FID. DEF”. The reverse depicts the ancient Assyrian Lamussu with “IRAQ” under.

The qualifying periods of service are:

Aircrew based outside both Zones One and Two but with 30 sorties flown into the Zones at a rate of not more than one per day, during the period 20 January 2003 to 28 April 2003.

Aircrew based outside of Iraq but flying 10 sorties into Iraq from 28 April 2003 to a date to be notified, at a rate of not more than one per day. 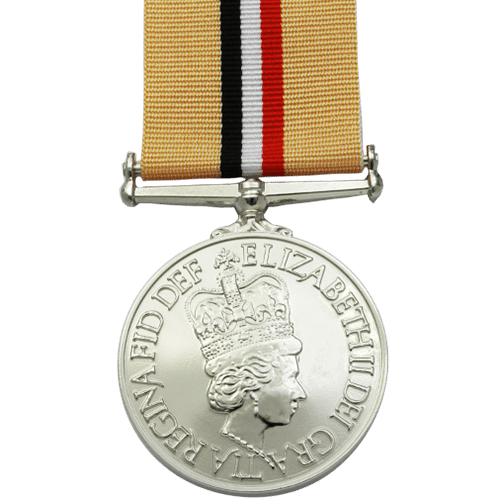