The Indian Service medal was sanctioned by the King in Parliament on the 6th June, 1946.  It was a campaign medal of the British Commonwealth that replaced the 1908 awarded. The medal was given to personnel of the Indian Forces, for three years non-operational service in India or elsewhere between 3rd September, 1939 and 2nd December, 1945 (WWII).  This medal was not awarded to those recipients who qualified for the Defence Medal.  The India Service Medal was additional to the War Medal and Campaign Stars and takes precedence immediately after the War Medal.

There are two different striking’s of this medal, one being minted in England and the second minted in Calcutta, India.  The latter is slightly thicker and general finish is poor compared to the English version and that the Indian issue claw is plain where on the British striking it is ornate.

The following where eligible for this medal:

Ribbon – Stone coloured centre flanked by thin red stripes on each side and green edge’s 6mm wide. This is to represent the colours of the Order of the Star of India and the Order of the Indian Empire.

Description – The Indian Service Medal is circular, cupro-nickel made and 36mm in Diameter.  The obverse of the medal is the same as that of the War Medal, thus showing the crowned head of King George VI and the legend ‘GEORGIVS VI D : G :BR : OMN : REX ET INDIAE IMP’. (George VI by the grace of God King of Great Britain and Emperor of India).  On the reverse it can be observed a relief of the India's map and the words "INDIA" and "1939-45" 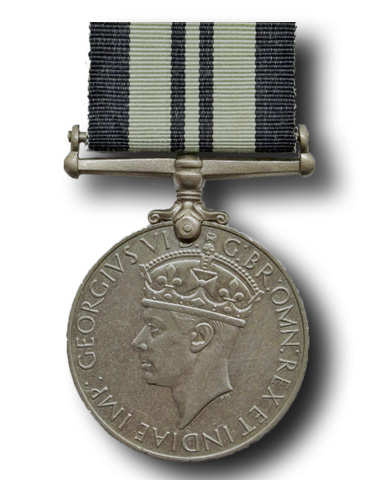