Approved in 1992, the Gulf War Medal is a campaign medal awarded to officers and men of British forces who served in Saudi Arabia and Kuwait during the ‘Operation Granby’ (Liberation of Kuwait, following the Iraqi invasion) in 1990-91, over 45,000 of these medals were awarded to personnel involved in this Operation.  This medal was also awarded to approximately 1,500 civilians including American, Australian, British, Canadian, New Zealand, employees who worked at Marconi Defence Systems and British Aerospace at Dharan and Riyadh.

Personnel were awarded the Gulf Medal for 30 days continuous service in the Middle East (in a defined area of operations, including Cyprus) between 2nd August, 1990 and 7th March, 1991. Full details of Area of Operations are defined in the regulations are laid out in DCI Gen 185/91.

The Gulf Medal with Clasp ‘16 Jan to 28 Feb 1991’ was awarded to personnel for seven days continuous service in the Theatre of Operations as defined in the regulations between these dates, which signify the dates of the actual war.

The Gulf Medal with Clasp ‘2 Aug 1990’ was awarded to the members of the Kuwait Liaison Team who were in Kuwait on 2nd August 1990, the date of the Iraqi invasion.

Ribbon – A wide central stripe of sand coloured yellow flanked on each side by vertical stripes at each edge of dark blue, red and light blue. These all being symbolic to the forces; dark blue – Navy, red – Army and light blue – Royal Air Force.

Description – The Gulf Medal is circular, 36mm Diameter and made of Cupro-nickel. The obverse of the medal features the crowned effigy of Queen Elizabeth II and the wording “ELIZABETH II DEI GRATIA REGINA FID DEF”. The reverse of the medal bears the inscription “THE GULF MEDAL 1990-91” and bears a modern ‘combined operations’ badge of an anchor, eagle and an automatic rifle.

Awarded to the members of the Kuwait Liaison Team who were in Kuwait on this date.

Awarded for seven days continuous service between these dates in the designated Theatre of Operations. This clasp signifies service during the actual war.

In undress uniform, a rosette is worn on the medal ribbon to denote the award of either clasp. 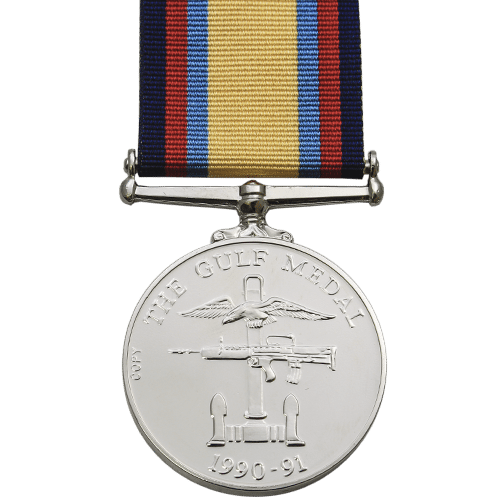