In order that they should be worthily and promptly recognised, I have decided to create, at once, a new mark of honour for men and women in all walks of civilian life. I propose to give my name to this new distinction, which will consist of the George Cross, which will rank next to the Victoria Cross, and the George Medal for wider distribution

As the Warrant states:

The Medal is intended primarily for civilians and award in our military services is to be confined to actions for which purely military Honours are not normally granted.

The original Warrant for the George Medal did not permit it to be awarded posthumously. This was changed in December 1977 to allow posthumous awards, several of which have been subsequently made.

The details of all awards to British and Commonwealth recipients are published in the London Gazette.

Eligibility – Those performing acts of bravery in, or meriting recognition by, the United Kingdom.

Awarded for – Acts of great bravery

Post Nominals - Recipients are entitled to the post-nominal letters GM

Bars / Clasps - Bars are awarded to the GM in recognition of the performance of further acts of bravery meriting the award. In undress uniform or on occasions when the medal ribbon alone is worn, a silver rosette is worn on the ribbon to indicate each bar

Description – Silver circular medal, 36mm diameter. The obverse bears the effigy of the reigning monarch. The reverse shows St. George on horseback slaying the dragon on the coast of England, with the legend ‘THE GEORGE MEDAL’ around the top edge of the medal. 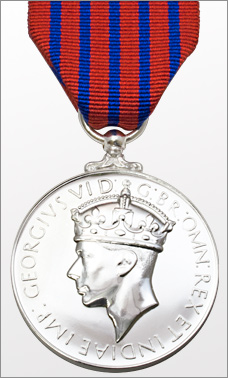