If the recipient had already been awarded the medal, then the additional clasp would be added to those already on the medal. Like its predecessors, the Naval General Service Medal (NSGM) and General Service Medal 1918-62 (GSM 1918-62), the GSM 1962 was not issued without a clasp. The clasps were worn on the GSM 1962 in the order that they were earned (reading from the bottom of the ribbon upwards), which is not necessarily the chronological order of the clasps institution.

Ribbon - 32 mm wide ribbon is purple with two outer stripes of dark green. These are the same colours as the GSM 1918–62, but with different proportions of these two colours being used for this medal.

The 1962 GSM is circular Silver

The medal shows the crowned effigy of Queen Elizabeth II.

The reverse bears the words ‘FOR CAMPAIGN SERVICE' under a crown, all surrounded by a wreath of oak leaves.

The 32 mm wide ribbon is purple with two outer stripes of dark green. These are the same colours as the GSM 1918–62, but with different proportions of these two colours being used for this medal.

GSMs have the name, rank, service number and regiment or corps of the awardee annotated on the rim of the medal.  It’s in small sans serif capitals for the UK. Australia and New Zealand issues in larger letters, no unit given on Australian types. This medal has since 2005 allegedly been laser engraved in a similar style to the Iraq Medal

13 Clasps were awarded to the 1962 GSM. The maximum awarded to any one individual appears to have been six.

When General Walter Walker arrived in Borneo in December 1962, to confront the Indonesian 'volunteers' infiltrating Malaysia, there were no British bases in Borneo, few tarmac-coated roads and only one deep sea port at Labuan.

General Walker eventually established a British and Commonwealth force, which came to dominate the border area and eventually defeated the persistent incursions into the area. This conflict claimed the lives of 114 Commonwealth personnel killed, with 180 wounded.

This campaign is related to the Radfan Campaign, because both were Egyptian-inspired attempts to end the British presence in Aden and end the embryonic Federation of South Arabia.

The terrorist campaign of 1964-67 was a rival affair between two groups attempting to gain control of the area, and ensure that the British did not retain a military presence after the planned independence of the Federation of Saudi Arabia; this was planned for no later than 1968.

This 3 yearlong campaign saw numerous terrorist attacks on both civilian and military targets. In both Rafan and Aden, the British Army suffered 90 personnel killed and 510 wounded.

The qualifying period was 30 days service in the Federation of South Arabia between 1 August 1964 and 30 November 1967.

This campaign was an extension of the conflict in Borneo where British and Malaysian troops were operating against Indonesian insurgents. In 1964, the Indonesian President decided to attack the Malaysian mainland. Parachute landings were made in Johore while other troops managed to land across the Malacca Straits from Indonesian Sumatra.

It was for operations in the Malaysian jungle against these troops that this clasp was instituted, as opposed to the concurrent Borneo operations.

The qualifying period was 30 days' service in the Malaysian Peninsula-Singapore area between 17 August 1964 and 11 August 1966.

This clasp was instituted by Royal Warrant dated 8 June 1968 for award to Australian personnel. Only 68 clasps were issued, and all 68 went to members of the Australian Army Training Team.

30 days' service in ships operating in inland waters or off the Vietnamese coast.

1 day in the service of a land unit.

30 days' service on an official visit.

For service after 29 May 1964, the personnel were awarded The Australian Vietnam Medal.

This clasp was instituted for award to personnel involved in law and order activities in Northern Ireland. This clasp is still being issued. There is currently no terminating date for qualifying service.

In 1965 the mountain tribesmen of Dhofar (now Oman) rose in revolt against the regime of Sultan Sa'ib bin Taimur. The revolt worsened in 1967 when the British left the adjacent State of Aden. The new communist government in Yemen provided an important base for the rebels.

By 1970 it was clear that the Sultan would lose the war unless some action was taken. On 23 July 1970, the Sultan's son staged a coup which provided the required change of direction. Some of the previous Sultan's excesses were removed, and the new leader expanded his armed forces and requested British assistance.

The British Special Air Forces (SAS) provided training for his local forces, the Royal Engineers provided military and civil engineering, and RAF officers provided the backbone of the new Sultan's air force. In addition to these contributions, many British officers were seconded to the Sultan's Armed Forces (SAF). As well as the British contribution, Jordan and Iran also provided assistance.

During this period, the British forces suffered 24 killed and 55 wounded.

In 1982, in attempt to remove PLO bases which were attacking Israel, Israel invaded Lebanon and struck north towards Lebanon's capital Beirut. However, they quickly became embroiled in the local Lebanese politics.

In October 1982, an US-inspired multinational peacekeeping force was sent into Beirut. It was composed of troops from USA, France, Italy and UK. Though all the other contingents suffered casualties (241 US Marines in one attack and 58 French troops in another suicide attack), the British troops carried out their assignments with no loss of life.

However, as the force was increasingly becoming just a target for the various factions, it was withdrawn during February - March 1984.

The qualification will be service of 30 days or more continuously in Kuwait, and its territorial waters, and the Northern Gulf north of 28 30N and west of 49 30E between 8 March and 30 September 1991.

The qualification will be service of 30 days or more continuously or three operational sorties in Northern Iraq west of 44 45E and north of 36 00N and Southern Turkey, including its territorial waters, east of 35 00E and south of 38 00N between 6 April and 17 July 1991. 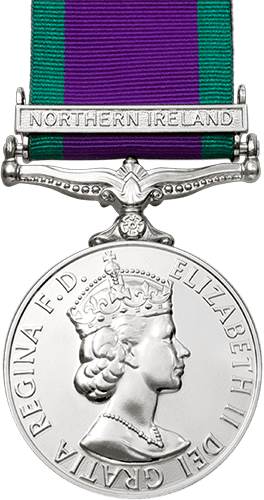 GBP 55
Log In / Register To Buy
View All Medals