The General Service Medal (GSM) was introduced in Army Order No. 4 dated 19th January 1923. This medal served as the Army and RAF equivalent of the Naval General Service Medal (NGSM). The GSM was awarded for service in various parts of the world, except in India and East, West and Africa.  This medal defines the (often inglorious) British retreat from Empire as well as various interventions deemed necessary due to the geopolitical imbalances generated in the aftermath of the two worlds.  This medal was intended for the Army and Air Force - the Naval General Service Medal 1915 - 1962 ran parallel with this for the Navy and Royal Marines, with similar (but not identical) bars.

Recipients of a Mention in Despatches were granted permission to wear a bronze oak leaf emblem on the ribbon for campaigns or expeditions after 11th August, 1920.

Description – Silver disk, 36mm diameter.  The medal is worn with a purple-coloured ribbon with one green stripe. After 11 August 1920, if the recipient was awarded a MID, then they were entitled to wear an oakleaf emblem on the medal's ribbon.

The reverse bears the standing winged figure of Victory in a Corinthian helmet and carrying a trident, placing a wreath on the emblems of the two services (Army - the sword and the RAF - the wings)

This medal has a total of 17 clasps which commemorate the various actions.

This clasp was awarded for the following:

This clasp was presented to those who satisfied one of the following conditions:

Those who qualified for the original period, 1945–1949, were awarded this clasp

The qualifying period for this clasp is 30 days' service between 1 January 1957 and 30 June 1960, in the Aden Colony or protectorate and the Sultanates of Muscat and Oman, or any of the adjacent Gulf States. 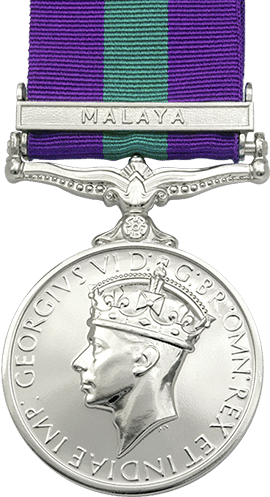 GBP 59
Log In / Register To Buy
View All Medals