The France and Germany Star was a campaign medal of the British Commonwealth, awarded for operational services in France, Belgium, the Netherlands and Germany between June 6th, 1944 (D-Day) and the May 8th, 1945, the German surrender and end of active hostilities in Europe during World War Two.

Due to British uniform regulations, neither the Atlantic Star nor the Air Crew Europe would be awarded to a recipient of the France and Germany Star.  The recipient of this medal could wear a silver rose emblem on the ribbon of the first star they earned when wearing the ribbons without the medals attached.

The Clasp with the title ‘Atlantic’ was awarded to the recipient qualifying for the France & Germany Star and the Atlantic Star. This was attached to the ribbon of the France and Germany Star to show service rendered.  A second clasp to this Star was not awarded for ‘Air Crew Europe.’

Ribbon – Five equal stripes of (from left to right) blue, white, red, white and blue.  These were chosen as being symbolic of the national colours of France, Netherlands, and the United Kingdom Union Flag.  Being noted that Belgium is not represented in the colours of this ribbon.

Eligibility – One or more days service in appropriate land or sea area.

Campaign – Service in the European Theatre of France, Belgium, Luxembourg, Netherlands or Germany between June 6th, 1944 (D-Day) and the May 8th, 1945.

Description – The France and Germany Star is a six–pointed star of yellow copper zinc alloy, with a height of 44mm and a maximum width of 38mm.  The obverse of the star is comparable in design to the Gwalior Star from the campaign of 1843.  The centre of the star is the Royal Cipher of King George VI, surmounted by a crown overlaid on a circlet which bears the title of the award ‘The France and Germany Star.’  The reverse of this medal is the same as other WWII Star campaign medals and plain, with no naming. 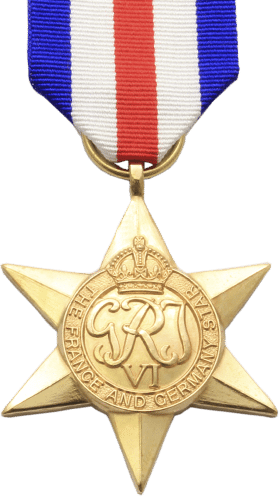